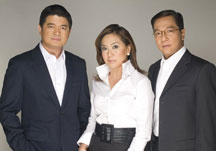 TV Patrol‘TV Patrol’ can now be seen online anytime and anywhere in the Philippines for free! Log on to http://tvpatrol.abscbn.news.com at 6:30 p.m. to catch the live streaming of the country’s number one newscast. Those who miss the live telecast can visit the site for episode replays and segment clips.

Netizens actively engage in online discussions during the chat, deliberating on current issues and reacting to the reports. Through the Internet, the viewing public has found a way to connect with ABS-CBN journalists via chat and there is a clamor to have “TV Patrol” anchors for chat sessions. ABS-CBN anchors and reporters have truly become multimedia journalists, reporting not just on TV but also online viaabscbnNEWS. com and actively posting updates on their respective Facebook and Twitter accounts. In fact, ABS-CBN anchors like Julius Babao, Karen Davila and Ces Drilon already have thousands of followers on Twitter.

The availability of “TV Patrol” on the Internet is one of the recent changes made when the newscast launched its new segments and use of augmented reality technologies that were previously used in the successful news coverage of ABS-CBN, “Halalan 2010.” Stay informed. Always watch “TV Patrol” on TV or on the Internet every night at 6:30 p.m., only at ABS-CBN and on http://tvpatrol.abs-cbnnews.com!