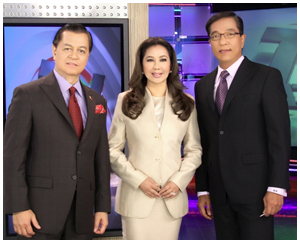 Kabayan Noli de Castro, Korina Sachez, Ted FailonABS-CBN News and Current Affairs marks the 25th anniversary of “TV Patrol” with a special documentary that highlights its vibrant history and evolution and confronts the controversial issues the country’s number one television newscast has had to face.

Titled “Mga Nagbabagang Balita: 25 Taon ng TV Patrol,” the documentary will revisit the newscast’s creation and the memorable stories that defined the program and helped shape Philippine contemporary history to be shown on Sunday (July 29) on ABS-CBN.

Speaking for the documentary, ABS-CBN chairman and CEO Eugenio “Gabby” Lopez III shared how the pioneering news program made a difference on TV news broadcasting and how it became a daily viewing habit by millions of Filipinos in the country. He said it posted “unusually” high ratings compared to any program shown after its timeslot when it was launched.

“Originally, the common thinking was, it was the primetime entertainment programs that generated the most significant revenues. In the case of ‘TV Patrol,’ it was the highest rating and highest grossing program in its early years,” said Lopez.

And years since, it has remained as the country’s undisputed, number one newscast in the country. "TV Patrol" is still the most-watched newscast with a national TV rating of 31.8%, or almost twice higher than rival “24 Oras” with 17.6%, based on the June 2012 data from Kantar Media.

Ging Reyes, head of ABS-CBN News and Current Affairs, also stressed how the newscast has become part of Filipino’s everyday lives and Pinoy pop culture. “People are afraid to be reported on TV doing unlawful activities. ‘O, baka ma-TV Patrol ka.’ ‘Naku, ayokong ma-TV Patrol!’ That’s the biggest mark it has left on us as a nation,” she said.

Being a part of the program has also compelled Noli ‘Kabayan’ de Castro, who anchors “TV Patrol” with Korina Sanchez and Ted Failon, to go out in the field and look for his own stories instead of just reporting them from the studio.

“I don’t want to be called a news reader. I am a newscaster. I want to know what’s happening and I know when something is important enough to share with the viewers. I get to know what people want. That’s what happens in ‘TV Patrol,’” he said.

The documentary will also revisit some of the biggest news stories the past 25 years such as the 1990 earthquake, Mt. Pinatubo eruption, coup attempts, etc.