Manila Radio head Peter Musngi and DZMM station manager MArah Capuyan (6th from right) for DZMM SilveradyoABS-CBN Corporation won a total of seven Anvil Awards, considered as the Oscars of the public relations industry in the country, and making it as the most-awarded TV network in this year's race for its outstanding PR programs and tools.

The Kapamilya network's necrological services that paid tribute to an entertainment icon, campaigns for the silver anniversary celebrations of its flagship primetime TV newscast and an AM radio station, relief operations for typhoon victims, station ID that highlighted the uniqueness of Pinoy summer, and an internal campaign that engaged ABS-CBN employees through various services were awarded by the Public Relations Society of the Philippines.

"Salamat, Tito Dolphy," ABS-CBN's necrological service and tribute to the King of Philippine Comedy staged within 24 hours after Dolphy's death won for efficiently harnessing the company’s people and resources and brought together Dolphy’s family, friends, colleagues, and even competing TV networks and media organizations. More than 6,000 fans attended the event that was carried out with no glitches. 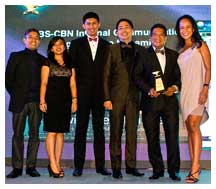 ABS-CBN Foundation Inc.'s "Sagip Kapamilya" was cited for its “Sagip Kapamilya Ondoy Relief Operations," which raised funds and provided relief and rehabilitation for the victims of typhoon Ondoy.

Similarly, the leading AM radio station DZMM Radyo Patrol 630 won for its year-long 25th anniversary celebration "DZMM SilveRadyo" that culminated with a concert at the Araneta Coliseum and reinforced how it has remained true to its slogan “una sa balita, una sa public service” for more than two decades.

Lastly, ABS-CBN Internal Communications, under the Corporate Communications Division, won an award for engaging the employees through various communication tools and activities that strengthened their affinity as Kapamilya and making them the company's best brand ambassadors.

ABS-CBN won a total of seven Anvil awards vs TV5’s three and GMA with none.

The Anvil Awards is an annual event organized by the PRSP that honors outstanding public relations programs and tools. Prior to the Anvil Awards, ABS-CBN earned eight recognitions for its PR programs from the Philippine Quill Awards given by the International Association of Business Communicators. ABS-CBN was the most-awarded TV network in both Anvil and Quill Awards that honor the best works in public relations and business communications. For more photos, click here. (Story/Photos by: Kane Choa)