ABS-CBN is choice of students and professors, wins 82 awards 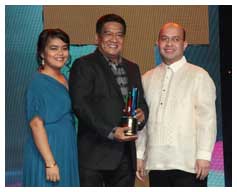 ABS-CBN Corporate Communications Head Bong Osorio (center)ABS-CBN is the most awarded TV network by the academe as it swept the awards given by five different university award-giving bodies, including Gawad Tanglaw’s Best TV Station of the Year and three Hall of Fame awards. 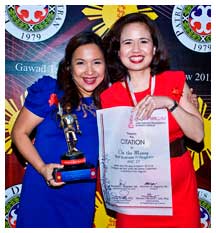 ABS-CBN also won 13 honors at the NWSSU Awards, while it won 21 awards from UP Gandingan in January, including the top plum, Most Development-Oriented TV Station and Best AM Station for DZMM.

“Be Careful With My Heart” lead stars Jodi Sta. Maria and Richard Yap received the loudest cheer from the audiences in both Gawad Tanglaw and USTv Awards, which were both held last March 7. 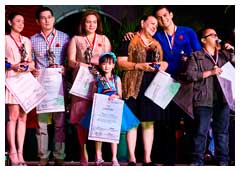 Kapamilya stars stole the show at the Gawad Tanglaw led by Gerald Anderson, who received the perfect birthday gift, his Best Performance by an Actor award for “Budoy.” Coco Martin also won the same award for “Walang Hanggan.”

USTv Award’s biggest winner was Angel Locsin, who bagged the first ever Students’ Leader Choice of TV Personality for being a good role model who excels in her craft and helps people through charitable works.

Queen of All Media Kris Aquino was hailed the Student’s Choice of Talk Variety Show Host for “Kris TV,” while director Chito Rono was recognized for his work in Star Cinema’s “The Healing” which was named Students’ Choice of Local Full Length Film.

Here is the list of winners for this year’s Gawad Tanglaw, USTv Awards, Hildegarde Awards, NWSSU Awards, and UP Gandingan: 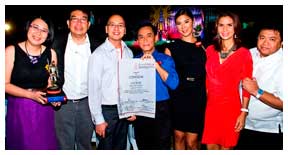 HILDEGARDE AWARDS FOR WOMEN IN MEDIA AND COMMUNICATION