Elizabeth Oropesa reveals why she quit showbiz in "Hiwaga" 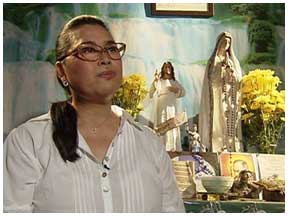 Ms. Elizabeth OropesaShe was a beauty queen and an award-winning actress but what if she has a special gift that demands her to leave the limelight?

Broadcast journalist Atom Araullo tells the story of Elizabeth Oropesa-Freeman who chose to focus not on stardom but on her ability to sense auras and heal this Friday (May 24) in “Pinoy True Stories: Hiwaga.”

Many know her from the film “Bulaklak ng Maynila” and “Ang Pinakamagandang Babae sa Balat ng Lupa,” but what most don’t know is that she comes from a lineage of people who are gifted with a “third eye.”

Although having a third eye meant sensing engkanto and other espiritu, Elizabeth’s gift doesn’t stop there because she also possesses healing hands and the ability for astral projection.

But before she can demonstrate her abilities to sense auras to detect problems on Atom Araullo himself, how did a movie star cope with such a different and difficult ability? And did she really have to sacrifice her career for this gift?

Don’t miss the full story in “Pinoy True Stories: Hiwaga,” anchored by Atom Araullo this Friday (May 24), 4:45 p.m. after “Glory Jane” on ABS-CBN. For updates on the program, visit www.abs-cbnnews.com/currentaffairs.

Watch the other “Pinoy True Stories” produced by ABS-CBN News and Current Affairs, such as “Bistado” with Julius Babao every Monday, “Engkwentro” with Karen Davila every Tuesday, “Saklolo” with Maan Macapagal and Dominic Almelor every Wednesday, and “Demandahan” with Anthony Taberna every Thursday.(Story/Photos by: Kane Errol Choa)