Juday: ABS-CBN will always be my first choice 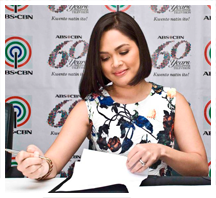 “Regarding talks about possible offers from the other networks, we were willing to listen. But since I am a Kapamilya, I can’t deny the fact that ABS-CBN will always be my first option,” Juday said after signing a two-year contract. She also confirmed that she will be hosting the newest Kapamilya game show, “Bet On Your Baby.”

“Bet On Your Baby” will air soon in ABS-CBN. (Story by: Kane Errol Choa)

LPA to bring rains to parts of PH: PAGASA