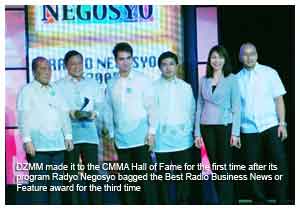 Meanwhile, “Sports Unlimited” hosted by Dyan Castillejo and Marc Nelson made it to the CMMA Hall of Fame for winning Best Sports Program for three consecutive years, as well as DZMM’s “Radyo Negosyo” for Best Radio Business News or Feature. This is the first time DZMM entered the prestigious Hall of Fame.

A special award was given by Manila Archbishop Gaudencio Cardinal Rosales to “May Bukas Pa,” which was accepted by Zaijian “Santino” Jaranilla and the “fathers” of Brgy. Pag-Asa. ABS-CBN Cebu’s “Sidewalk” also received a citation as Best Educational Program for radio.

The CMMA honors media practitioners in television, radio and music who have promoted basic human values through their works.