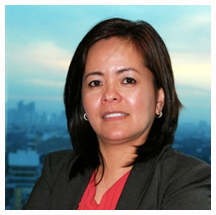 Ging ReyesGING Reyes, head of the ABS-CBN News and Current Affairs Division (NCAD) since mid-October 2010, is a homegrown kapamilya.

She joined ABS-CBN Corporation as production assistant for News in 1986, immediately after the network reopened after the EDSA Revolution. Reyes quickly proved her worth to rise from the ranks and become executive producer and head writer of “The World Tonight,” ABS-CBN’s award-winning English-language newscast that aired on VHF Channel 2 before moving to the ABS-CBN News Channel on cable.

Reyes became director for news production in 2001 and then North America News bureau chief in 2002. In the latter post, she expanded the scope of news operations to include the entire US and Canada, and developed local content for Filipino-American communities. She created “Balitang America,” a half-hour primetime newscast seen on The Filipino Channel.

“’Balitang America’ started airing as a weekly. Now, it’s daily and I believe we’ve done our part to make the Filipino communities in North America appreciate news that affects them… I’ve seen firsthand the hardships the Filipino communities faced and it was important to reach out to them, even as you report objectively and sometimes unfavorably about them,” said Reyes.

Bringing issues to Fil-Ams
Issues the North America bureau under Reyes brought to the homes of Filipino-Americans included the war veterans’ cause, the inaugurals of US Presidents Bush and Obama, immigration, welfare and economic bills, and local crime stories with significant impact to Filipino communities.

In recognition of her work, Reyes was named by the Filipina Women’s Network as one of the 100 Most Influential Filipino Women in the US in 2007.

Former NCAD head Maria Ressa in fact invited Reyes to return to the Manila newsroom in 2008. But Reyes felt she still had so much to do at the bureau. “We were in the middle of a reorganization, we were launching a website (www.balitangamerica. tv). I wanted to finish what I was doing in the US at the time,” Reyes recalled.

The right time
The right time came last year. She had accomplished what she set out to do in North America, and was at a crossroads in her professional and personal life.

“They (ABS-CBN management) appealed to my sense of mission, to my sense of service to the company. My default was to say no. I was happy, perhaps too comfortable in North America. I had control of my life and my time.

The stress was quite manageable. I didn’t want such a drastic change in my life. But their persistence helped. They got me to think in terms of ‘what if ’… To turn down (the offer) was the easy thing to do. I didn’t want to believe that I was one to turn my back on a challenge. Was I up to it? Am I losing my edge? If I did not accept the challenge, I was sure to regret not even trying,” Reyes said.

So it comes to pass that as Reyes marks her 25th year of continuous service to ABS-CBN News in 2011, this kapamilya has come home. What indeed has made her stay all this time?

Believing in ABS-CBN’s mission
“I believed in its (ABS-CBN’s) mission—serving the public. I knew that when it mattered most, it (the company) delivered on that mission. I know that firsthand. So I stayed,” she said.

Her message to LopezLink readers in this age of stiff competition in multi-platform communications: “We will always take the lead in communicating with and engaging our viewers, and in delivering the news to our fellow Filipinos all over the world. We know our strengths and maintain strong relationships with the communities we serve. We will use these strengths to effect change and to empower our communities. ABS-CBN has a mission and news and current affairs will always be a big part of delivering on that mission.”