Gina Lopez’s deputies: The artist and the traffic cop 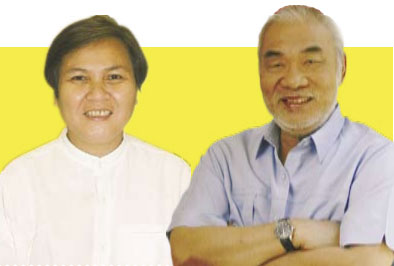 The former artistic director of the Cultural Center of the Philippines has stayed on top of BB163 operations since 2000, setting up the Children’s Village in Norza-garay, Bulacan and the program’s nationwide branch network.“I found it very hard to refuse Gina (Lopez, AFI managing director). I knew very little (about social work) but what attracted me was the recognition (by AFI) that creative imagination had a role to play in the healing of abused children, in helping them imagine a better life. With my background in arts and culture, I found the connection in the use of imagination for healing. Besides, how do you refuse abused children? I wanted to see where it (AFI work) would take me and how I could help,” recalls Aragon.

A University of the Philippines graduate of AB English and Comparative Literature, Aragon was drafted for the KBPIP project in February 2009.

“It’s been a privilege to actualize Gina’s vision, which I’ve found to always be anchored on the highest ideals, sustained by the wonder and faith of a child, and executed with incredible energy and passion. I saw in the Pasig River project a chance for us to have a more humane, livable urban environment. It’s imagining and creating a better space for people to live in. A large part of this is in reestablishing our connection to the water around us, and in this case, the Pasig River,” says Aragon.
According to Aragon, a shift in consciousness is needed, that is, people must care for and give value to the river again so that they will face the river instead of turning their backs to it. Such change of mindset is a key element to support the mul pollutants. Another hurdle is the relocation away from the waterways.

“A lot of well-intentioned people have done this (river cleanup). Sometimes we do a cleanup and the next day, it’s dirty again. So we just do it all over again. This is the time to show our mettle. We have to show that we are serious about the cleanup and that we will not be going away anytime soon. We’re giving it our best shot,” says Aragon.
Enter the traffic cop

First Philippine Holdings Corporation’s Fiorello R. Estuar also joined the KBPIP team in March 2009. He had come out of retirement in 2001 to lead construction subsidiary First Balfour Inc., where he is now vice chairman and chief executive officer.

A civil engineer with a Doctor of Philosophy degree from Lehigh University who good-naturedly refers to himself as a “doktor ng bakal” (doctor of steel), Estuar found the KBPIP to be a “very exciting project” and was drawn in by Lopez’s vision and passion for the Pasig River.

“I saw it as an opportunity to make a contribution,” says Estuar. The project also allows him to network with many like-minded persons and organizations who wish to reduce pollution and create a better metropolis.

Within a month, Estuar put together a general framework in which the many aspects of the program the multifaceted solutions to the multifaceted problems of the Pasig River—can be classifed and monitored. Applying project management techniques, there is now room to accommodate the effort s of all interested parties and a way to measure their contribution.

The reduction of pollution loads will be the main measure for activities directed toward cleaning up the river. Pollutants in the Pasig River have been identified as domestic liquid waste, industrial liquid waste, and solid waste. Estuar has classified solutions to reduce waste into seven categories: treatment of waste at source; relocation of polluters; programs by the water utilities that require massive investments; direct river cleanup, including dredging; effective governance; enhanced communications and fundraising.

Because there are many groups who all want to revive the Pasig River, including the Pasig River Rehabilitation Commission, local government units and a host of nongovernment organizations, all their activities can be logged onto the framework to properly account for their eforts and the impact each project has on the overall goal.

In this manner, Estuar will act as some sort of traffic cop to make sure various activities are actually helping, and properly prioritized in terms of how much help they are contributing to the goal.

Aragon welcomes Estuar’s framework as a means to align all the efforts being done to clean up the Pasig.

“There is a chance for everybody to come in and to help in whatever way they can. Gina wants to involve the Lopez Group companies in taking stewardship of certain portions of the river. Personally, apart from cleaning up the water, I hope there is an opportunity for public art spaces in the redevelopment of the Pasig River,” she says.

Estuar says, “Let’s support this worthwhile undertaking. We can contribute as corporations, as individuals. There is no one solution to the problem, but with the many community-based and participatory approaches, we have that chance to help.”