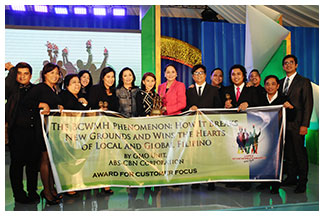 The Ginny M. Ocampo (GMO) Unit for The BCWMH Phenomenon: How It Breaks New Grounds and Wins the Hearts of Local and Global Filipino, ABS-CBN CorporationThe eight winners of the Lopez Achievement Awards (LAA) cycle 2012-2013 represent the best performance for the last year in their respective categories. They add to the compendium of exemplary contributions toward business excellence as the Lopez Group journeys to make its member companies built to last.

Customer Focus
“Be Careful with My Heart” broke new ground for a daytime series with its light, wholesome and slice-of-life storytelling that won the hearts of local and global Filipino audiences. With its authentic take on everyday situations, viewers immediately identified with the program’s characters. The show’s overall message of love, working hard to fulfill your dreams and practicing good Filipino values resonated with countless families that made it a late-morning habit to see the program, if not its rerun during the weekend.

Business unit head Ginny Ocampo said: “It was our strong belief that non-primetime viewers are no different from primetime viewers and deserve nothing less… ‘Be Careful with My Heart’ blazed the trail for new formulas for TV drama and set the trend for high definition quality programs in constant pursuit of excellence.” 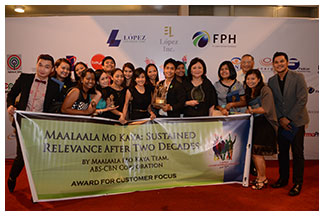 The Maalaala Mo Kaya Team for Maalaala Mo Kaya: Sustained Relevance After Two Decades, ABS-CBN Corporation
“Maalaala Mo Kaya” (MMK), meanwhile, was recognized as another unstoppable habit, which sustained and grew its weekly audience over two top-rating decades and still counting. As the longest-running and most awarded drama anthology in the country, MMK is a singular treat for its loyal viewers who have matured with the show and embraced its heartwarming, if sometimes heartbreaking true stories on the lives of its letter senders.

MMK unit head Malou Santos said: “MMK has long ceased to be a simple drama show. The team has upped its efforts to reach out to and change the lives of its audience, ensuring the continued significance and relevance of the program and its mother network.”

Human Resource Focus
“1sa Para sa Bayan” is an employee engagement program that motivated every employee of Bayan Telecommunications Inc. to sell at least one Bayan service each during the threemonth period from January 24 to April 30, 2012. 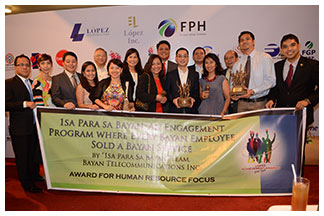 Bayan’s “1sa para sa Bayan” Team for 1sa Para sa Bayan: An Engagement Program where Every Bayan Employee Sold a Bayan Service, Bayan Telecommunications, IncWith 1,189 employees nationwide, it was a challenge— most especially for the company’s non-sales employees who were not used to selling; and those employees not living in Bayan service areas-to even participate. All employees nationwide whether sales and non-sales, gladly owned up the challenge to support the program; some even made their own posters or ads which were seen on social media pages, especially Facebook. In the end, a total of 1,651 new line installations were booked by Bayan employees during the period, for a 143% achievement rate.

Bayan chief operating officer Raffy Aguado said: “The achievement shows the level of engagement of Bayan employees. It shows the aspect of sincere caring for the company.”

Public Responsibility
“Patrol ng Pilipino,” a revolutionary and award-wining news magazine of ABS-CBN Current Affairs, excelled in the Public Responsibility category. Without a fixed host, stories are written by ABS-CBN “TV Patrol” reporters as they gather the news from their different beats or coverage areas on a daily basis. As a training ground, junior reporters learn to act as story producers and make mini-documentaries or indepth stories that are longer than those usually accommodated by daily news reports. 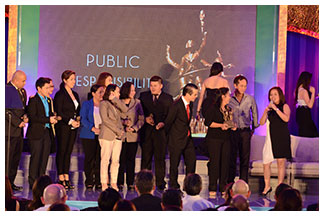 Executive producer Donna Cueto said: “‘Patrol ng Pilipino’ aims to deliver intellectual, comprehensive and in-depth reports with stunning visuals. It caters to the general public’s need for a broader take on top news stories, be it political, environmental, social, cultural or spiritual. The team has gone lengths to produce stories worth watching, hearing and knowing.”

Citizen journalism zoomed past reportage to build dynamic advocacies and foster a climate of civic responsibility. Tayo Na! credits its team of Bayan Patrollers into its evolution from an election watch (Boto Mo, Ipatrol Mo) to a community patrol (Bayan Mo, Ipatrol Mo or BMPM). A full year before the 2013 Philippine midterm elections, BMPM mobilized to upgrade the news coverage skills of its patrollers and ensure their safety as they tackle not only election-related, but also community concerns.

Chief aggregator Pamela Munji said: “The proactive role played by Bayan Patrollers boosts their sense of nationalism, showing proof that things are not hopeless in the country. Constant engagement has taught strangers from various parts of the country and the world to work together to help those in need… Through workshops and online, they learn integrity in reporting and in dealing with officials.” 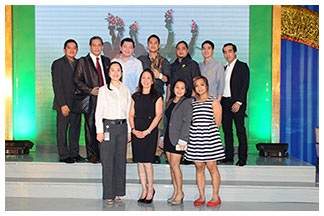 The Corona Impeachment Trial TEAM for Special Integrated Coverage of the Corona Impeachment Trial, ABS-CBN Corporationtapped the most senior anchors and analysts for the four-month long, uninterrupted and unparalleled coverage of history unfolding before the viewers’ very eyes. Although the project resulted in a budget overrun and the loss of regular advertising revenues, ANC reaped intangible benefits. It enhanced the news equity of ABS-CBN, ANC, DZMM and Dotcom (www.abs-cbnnews.com).

ANC news manager Francis Toral said: “The success of the project cannot be measured by pesos and cents. We’d like to believe that it led to a better climate and support structure for businesses and a better quality of life for the public. Given the results, the cost to the company cannot compare to the intangible value of effecting such positive change.” 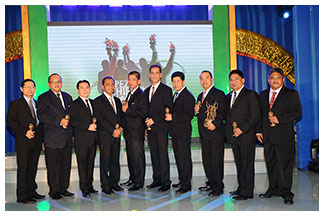 NIGBU Maintenance Department for Road and Site Restoration Works in NIGBU after TS site restoration allowed the delivery of food, fuel and supplies to operations personnel stranded in their work areas. EDC’s work also benefited surrounding communities because access was restored and all forms of help were able to reach the affected barangays after the typhoon.

NIGBU Maintenance Department manager Vicente Omandam said: “The project demonstrated the unity, teamwork, dedication and bias for action of NIGBU maintenance personnel, and the resilience of NIGBU and EDC as a whole against natural calamities in performing its mandate to provide uninterrupted, clean and renewable source of energy to the Filipino people.” 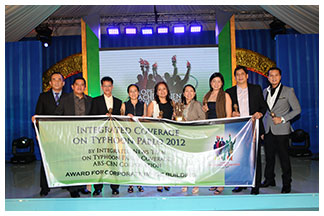 Integrated News Team on Typhoon Pablo Coverage TEAM for Integrated Coverage of Typhoon Pablo 2012, ABS-CBN Corporationwith the TV news teams living the life of evacuees, with no roofs over their heads, shivering in the cold wind and scrounging for food which was scarce.

ABS-CBN Newsgathering head Chi Almario said: “When other news teams and even most government workers have gone home to celebrate Christmas, the ABS-CBN news team stayed behind to celebrate with the victims, using money from their own pockets. Most of the time, a successful corporate image is achieved through a focused and excellently executed campaign or project. But this was not planned or designed. And that makes it more incredible. It showed that the news team lives by the corporate image of a true Kapamilya, sa hirap at ginhawa.

The LAA harvest is replete with inspiring stories and heroic deeds. The winning teams are worthy of emulation, demonstrating passion at work and beyond. (Story/Photo by: Carla Paras-Sison)