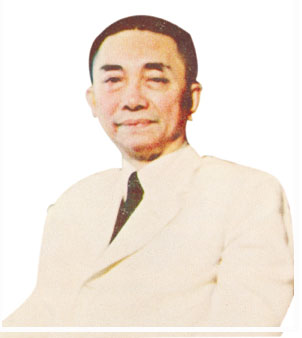 THE saga of one of the Philippines’ most successful business families comes to life in “Undaunted,” a musical that chronicles the story of the Lopezes of Jaro, Iloilo as seen through the eyes of OML.

OML and his late brother Geny are the main characters in “Undaunted,” and the opening scene shows them at the funeral of their father, Eugenio Sr., in 1975. Also present are their mother Nitang and younger siblings Manolo and Robby, and Fernando (Nanding) and his wife Mariquit.

Even as he grieves, OML is seized with a desire to memorialize the life lessons imparted by his father. “Knowing our roots assures survival amid today’s swift changes. On the conviction that knowing your family roots provides the best defense against being carried away by the winds of change, I studied the history of our family…,” he says. Through vignettes from the lives of their ancestors, the audience discovers the Lopezes’ role in pivotal events in the country’s and Iloilo’s history. “Undaunted” also chronicles how, with vision and daring, Eugenio Sr. and Nanding cultivated the Lopez family fortune and how they harnessed it to benefit the less fortunate. “…The reason we have lasted so long really comes down to the values passed down to us by the older Lopezes: values like family unity, honor, integrity, loyalty, nationalism, entrepreneurship, and a strong work ethic,” OML emphasizes.