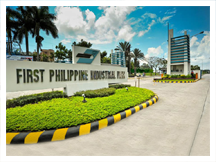 With an estimated 45,000 people passing through its gates by next year—bigger than the population of some US towns— FPIP president Ferdinand Edwin S. CoSeteng paints a picture of a thriving community where locators and their employees can happily work, play or even live.

Beyond just selling to them a piece of land, or showing to them a ready-built factory, presenting locators with a “full menu of services” up front is very important, CoSeteng stresses.

“You have to give them the best industrial experience they’ve ever had in their lives. If a new locator comes in and asks to talk to the current locators and the latter say, ‘I’m in heaven. We operate multiple factories and sites worldwide and this is the best place we’ve ever been’—those are the comments we hope our customers will say.”

Heeding then President Fidel V. Ramos’ call for big business to contribute to nation building and to help draw foreign investors to the Philippines, the Lopez Group and partner Sumitomo Corporation established FPIP in 1998.

In just 15 years since it opened its gates for pioneer tenant SB Flex, FPIP has grown by a few hundred hectares and is now home to over 70 locators. In the past three years and a half, the park attracted big-name locators such as BE Aerospace (2010), Murata and Sonion (2011), and Canon and Brother (2012).

Today, Canon lays claim to the distinction of being the biggest locator in terms of land area, with 30 hectares total. Previous record holders Nestle Philippines and Philip Morris are close behind with 27 hectares and 25 hectares, respectively. Having these global product leaders in its park has propelled FPIP to its best year ever in 2012, with revenues topping P2.094 billion and net income of P1.114B.

Hearing aid manufacturer Sonion just inaugurated its factory in early July. The Denmarkbased company carved out its “most complex…site with all [its] competences represented under one roof,” according to Sonion’s general director Niels Ole Jeppesen, on its 11,500- square meter parcel of land. Their Philippine factory currently employs 130 people and is looking to increase this to 800 employees, including product and process design engineers, by the end of 2014.

Manufacturing was reported to be one of the top three recipients of foreign direct investments (FDIs) in the Philippines, alongside the real estate and financial sectors.

For its part, FPIP, through its locators, has been able to support the creation of around 40,000 direct jobs, in industries as diverse as food products, motorcycles, printers, electronics, optical reading devices, semiconductors and solar panels.

For CoSeteng, his job simply to help the company’s customers succeed in the Philippines. He took over as the third president of FPIP from Hector Y. Dimacali, who practically steered FPIP from its inception. CoSeteng, a former Hong Kong expat, was making the rounds to introduce himself to the new locators and just marked his 100th day in his new post when he was interviewed by LopezLink.

The new kapamilya likens his assignment to running a “gated community for factories.” The “residents”—in this case the locators— range from multinational companies that are old hands at setting up in a foreign country or those who are stepping out of their home country for the first time who may need more assistance and hand-holding.

“You want them to be successful,” he says of FPIP’s clients. “As they succeed, they add capacity. Maybe they might need to buy more land, or they may attract more suppliers to come in because they’re at a scale where they can justify making investments in the Philippines.”

CoSeteng, who formally joined the Lopez Group in November 2011 as senior vice president of First Philippine Holdings Corporation, believes the true prize for cornering a bigger chunk of the locators’ pie goes beyond record earnings or more expansion for FPIP; it’s “contributing to the country’s continued growth and being a catalyst for job creation.”

“For some prospective locators, seeing the country for the first time is practically an ‘outof- body experience’ because they never imagined it to be such a welcoming, ideal place to locate their business,” CoSeteng observes. “A lot of people are still working on very dated biases and memories of what the Philippines was. Today, in Asia, the Philippines is a dynamic, progressive, and safe place to set up and grow a business.”

The challenge then—although CoSeteng prefers to view them as “opportunities”— is for FPIP to be ready to dispel these notions and prepare for a growing influx of locators: providing more inventory; developing a comprehensive menu of services; targeting and marketing to industries most likely to relocate to thePhilippines and by creating more commercial activity due, in part, to the growing needs of its locators and their employees.

Building on the Philippines’ increasing attractiveness as both a production site and marketplace, CoSeteng sees FPIP welcoming more potential customers. “As it makes more business sense for locators to visit and consider the Philippines as a manufacturing site, we need to give them more compelling reasons to stay at FPIP.”