Lopez Holdings: Resilience in the face of adversity

Previously known as Benpres Holdings Corporation, it now proudly shares the name of the family that founded it, and bears a new logo that at once recalls its rich history, expresses it forward-looking character and evokes its vision of a brighter, better future. Its financial restructuring also neared its successful conclusion.

The Lopez holding company for communications and power investments has had a tough decade since the Asian financial crisis.

Founded in 1993, it became a publicly listed company via a P3-billion initial public offering. Lopez Holdings was created to be the conduit for investments in exciting new sectors of the newly deregulating Philippine economy.
Investing in vital industries 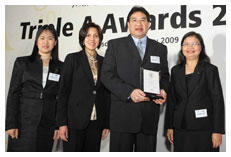 Triple A AwardsIn keeping with the Lopez Group’s mission, Lopez Holdings invested in industries vital to nation-building such as infrastructure, power, water and media and communications. These were essential at a time when the Philippines was recovering from martial law and discovering the possibilities of the privatization of public services. For a while, everything was golden.

It raised funds from the international bond market in the early to mid-1990s for its new investments, all of which required extensive capital. It would enter telecommunications, toll roads and a water utility, while growing its media business and shifting its power business toward generation instead of distribution.

A year after its parent company was formed, First Philippine Infrastructure Development Corporation (FPIDC) was created as the vehicle for investments in one of the country’s largest infrastructure ventures, the Manila North Tollways Corporation (MNTC). This was a joint venture with the Philippine National Construction Corporation and Egis Projects S.A., formerly TransRoute International SA of France. Together they took on the task of rehabilitating the North Luzon Expressway.

In the same year, Lopez Holdings organized Maynilad Water Services Inc., a joint venture with Suez Lyonnaise des Eaux, now known as Ondeo. Maynilad operated and managed the water and wastewater services of the western half of Metro Manila.

But the Asian financial contagion that struck in 1997 practically doubled Benpres debt in peso terms. Despite the strength of its profitable associates like ABS-CBN, the weight of the company’s debt load had a serious impact on its financial health. Bayan, SKYCable and Maynilad operations were plagued by various issues that affected their ability to provide returns to the parent company, while long gestation projects such as the gas projects of First Gen and the toll road rehabilitation of MNTC needed more time to come to fruition.
,br> Benpres chose to write off its investment in Bayan in 1999, but tough economic times persisted and forced the company to seek debt restructuring in 2002.

Maynilad had sued the government for violations of the concession agreement. From 2001, the case was in international arbitration until Maynilad itself had to seek

Bayan had to restructure its own debt through a court-assisted rehabilitation that ended in 2004. SKYCable also underwent debt restructuring following its consolidation of Home Cable, a process that closed in 2004.

Throughout the slow and painful negotiations, the company’s founders never lost heart. At the lowest point of the company’s history, stock prices plummeted to less than a peso. Over the past 10 years, there remained the single-minded focus on reducing the debt load.

When the dust had cleared, the company found itself with fewer assets, but also, with a much lower debt load.

In 2008, the company sold its stake in FPIDC, then known as First Philippine Infrastructure Inc., jointly with those held by associate FPHC. The sale provided sufficient funding to buy back debt. In 2009, a major creditor allowed the company to buy back debt papers at a discount on face value. The rest of the debt was restructured, and the last quarter saw what once seemed like an insurmountable debt reduced to $65 million.

This amount is fairly manageable, says Lopez Holdings president Salvador G. Tirona. If things go as planned, he sees the company’s leftover debt brought down to almost negligible amounts. One can almost feel the excitement and cheer among their investors that stuck it out.

“We are out of the woods,” says Tirona. “With the change of name, it’s like turning over a new leaf. We can now concentrate on paying dividendsto our investors who have been very, very patient in waiting for a return on their investments.”

Tirona has seen the company through a lot of rough patches— he joined the Lopez Group in 2000 as chief finance officer of Maynilad Water. He played a pivotal role in the negotiations and decision-making during the times when Maynilad and Bayan were some of the Lopez Group’s largest concerns. Now he is at the helm of a company that has immense potential and a solid history of being able to overcome challenges that would crush most other companies.

That is more than enough reason to be optimistic, with stock prices on the rise as investor confidence in the revitalized parent company and its hearty portfolio of firms begins to strengthen anew. But even in the midst of renewed purpose and celebration, Tirona says that the company will remain cautious about its investments.

“We have to look at how things were so that we can see what caused the problems and avoid the same in the future, should there be opportunities to consider new investments,” he explains. “We have to do our homework well in terms of supporting the investment decision and plan for several scenarios— including the worst case scenario—should things not turn out as originally envisioned.”

Nobody could have predicted that in around 10 years, the company that once owed its creditors almost $560M would rebound so quickly. But that has been the way of the Lopez Group—it has seen the darkest days, then returns to its full glory, seemingly only stronger after the ordeal.

At the end of the long journey, Tirona believes that there is no room for looking back with any regret. There are no scars here, only lessons. “Our most important lesson to take away from our past challenges is not to live in the past,” he reminds us “but just keep moving forward.”