A tale of two buildings: The historic properties of First Philippine Realty Corporation

First Philippine Realty Corporation (FPRC) ALTHOUGH First Philippine Realty Corporation (FPRC) isn’t one to blow its own horn, it manages two of the most historic and beloved structures that belong to the Lopez Group—Benpres Building in Ortigas and Eugenio Lopez Center in Antipolo City. These buildings hold much of the Lopez family’s history and legacies and are silent testimonies of the family’s resilience in the face of seemingly insurmountable odds.

The world will remember Don Eugenio “Eñing” Lopez Sr. for his countless achievements in business and his courageous stand against a dictator. However, one of his most notable legacies stands atop one of Antipolo’s highest hills—Eugenio Lopez Center or ELC.

The sprawling structure, located on 10 hectares of Lopez property, was originally meant to be the retirement home of Don Eñing and his wife, Pacita. Construction began in the late 1960s, but before it could be completed, President Ferdinand Marcos declared martial law. Don Eñing and his wife were forced to leave the country to escape the persecution of a vicious ruler. They were separated from the rest of their family, and neglected by their friends and business associates who feared retribution from the government. The family’s assets were seized and Don Eñing’s eldest son Eugenio Jr. (Geny) imprisoned; construction on the couple’s retirement home came to a grinding halt.

The land remained in the family’s possession, but sadly, Don Eñing passed away while waiting for the opportunity to return to his beloved country.

After the 1986 revolution, the Lopez family was reunited and their assets unfrozen, including the property where the foundations of Don Eñing’s would-be retirement home stood.

“There were discussions about what to do with my grandfather’s unfinished house in Antipolo,” relates FPRC president Oscar R. Lopez Jr.

“The idea to finish and use it as the family rest house was considered but it seemed like such a waste not to share the fantastic view with others.

First Philippine Realty Corporation (FPRC)Other suggestions included a health farm or restaurant. At that time, corporate universities had been gaining popularity as productivity tools, and with the rebuilding of the Lopez business units, that seemed to be the best fit. It was decided then to convert the structure into the Lopez Group training center.”

Construction was resumed in 1995, undertaken by Engineering and Construction Corporation of Asia (ECCO-Asia, now First Balfour) and under the supervision of then Lopez Group chairman Oscar M. Lopez. Luckily, the foundation had not suffered much from its years of being unattended, and the work was done without hitting any major hurdles. Some revisions to the original plans were made in order to allow for the functionality of the center, such as increasing the number of rooms and including a chapel, a mini theater, and a lecture room that seats 150 people.

The center was inaugurated on July 20, 1997, Don Eñing’s birth anniversary. Since then, ELC has been the venue of many Lopez family events, and even a few family weddings. Its main purpose, though, remains to provide a venue for a wide range of corporate training for members of the Lopez Group as well as unaffiliated clients.

First Philippine Realty Corporation (FPRC)The center runs on a skeleton staff of 10 that swells up to 50 when there is a need for it. These hardworking people maintain ELC’s 38 rooms and all its modern training facilities, ensuring that the center not only runs smoothly, but that visitors to the center are guaranteed a comfortable stay, a relaxing mix of business and pleasure.

As of press time, there are plans to further improve EL Center, but most efforts are being directed toward the repair of slight damage to the land incurred during typhoon Ondoy in 2009. However, Don Eñing’s legacy continues to delight and serve the business community, much like the man himself who had dedicated his life to excellence and service to the nation.

Historic marker in the midst of modernity
When Escarpment Road (now Meralco Avenue) in Ortigas was nothing but a lot of empty space and not the bustling hub of commerce it is today, one man had the foresight to know that it would one day be one of the major commercial areas in the metro. Having realized this, he created what would be the home of one of the most revolutionary newspapers, the nowdefunct The Manila Chronicle. 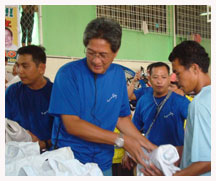 Eugenio Lopez CenterThe Manila Chronicle Building was supposed to have been the new base of operations for the paper and its staff, and work on the structure began in 1969. Pristine and efficiently designed, it occupied a 1.3 hectare lot, and its six stories offered up 12,000 square meters of floor space.

The entire newspaper office moved into the new office in February 1971, but because of the political climate in the country, printing was shut down in 1972. The newspaper would never again return to the building, even after the dictatorship was overthrown.

After the EDSA Revolution, the building was renamed Benpres Building and remained under the Lopez Group of companies. In 2003, FPRC took over the management of the property, and set it up so that it housed the Lopez Museum and Library and its amazing laboratory and collection of art and literature. It had to undergo some renovations, though. Lopez remembers that they had to make sure that the building was secure and sound. “When we took over Benpres Building in 2003, modernization was not a top priority.

It was more important to make sure that our tenants did not dread coming into the building with the thought that they were entering a building that was almost 40 years old.” 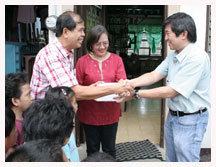 Eugenio Lopez CenterHe adds: “The first thing that was done was to think about the building’s occupancy and focus on function and safety. Spaces that were unused or non-revenue generating were improved upon. Fire exits were made to comply with building standards and a building committee, composed of representatives of the different tenants, was formed to address issues and concerns.” Yes, the building is an old one—and, at six stories, it’s dwarfed by the surrounding buildings—but it occupies the same land area as Tektite Towers and has been a part of Ortigas since the 1970s. It has seen a lot and like most old structures, it has quiet dignity and a sense of solid reliability. It also serves as home for some of the Lopez Group’s offices; in fact, 19 of the 20 building tenants are all members of the Lopez Group.

There are plans for constant renovations and improvements to be done on the old Manila Chronicle building to upgrade the service and functionality of the structure. The next time you’re in the Ortigas Center area—and especially if you work in the building— take a closer look. Benpres Building bears witness to decades of the Lopezes’ pioneering entrepreneurial spirit, business excellence and nationalism, and the employees’ dedication, loyalty and hard work—reasons enough for it to stand proud among giants twice its size.