ABS-CBN Publishing MagazinesMeet Vault. This sleek little gem stands out in a crowded market with its 6”x9” stats and softly rounded curves. As the youngest member of the ABS-CBN Publishing (API) family, Vault is one of the springboards that will propel the company into the global market. But that’s getting ahead of the story.

In 1992, treasury trainee Ernie L. Lopez was plucked out of PCIBank by his father Eugenio “Geny” M. Lopez Jr. He was put in charge of Guide Publications, which printed and distributed the SKYCable TV guide. The start-up was so small that when the team bagged magazines for distribution, the younger Lopez, designated the assistant to the president, would be bagging magazines with them.

This venture was preceded by a short-lived tabloid, Dyaryo Patrol, whose extremely lean team of less than a dozen people included Lopez

ABS-CBN Publishing Magazines Inc.’s Lito Banaag and veteran newspaperman Fort Yerro. Guide Publications would later be renamed Benpres Publishing, after which it adopted the name ABS-CBN Publishing when Geny Lopez passed on in 1999. ABS-CBN Publishing acquired a three-year-old title from the LJC Group, Metro, to kick off the refreshed venture and the Lopez Group was back in the publishing game.

The API portfolio is almost 100% composed of homegrown titles. This is because the DNA of the company, Lopez asserted, is more about creating its own products and showcasing Filipino creativity and artistry. API is now home to flagship magazine Metro and six other monthly titles, three quarterlies and a handful of biannual titles, annuals and specials. 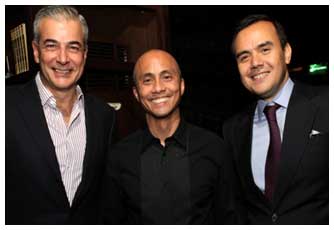 ABS-CBN Publishing with Zabel de AyalaNow, Lopez and API are gearing up to do battle in a new arena, firing their first shot with the release of the Metro application software on iTunes a few months after Apple jump-started the tablet revolution.

By downloading the free Metro app, subscribers may then download seven back issues of the magazine for free, plus portions of the latest Star Magic catalog. Downloads of current issues will set subscribers back by $1.99 each (about P87) and $0.99 (about P43) for each older issue not included in the freebies bundle.

API has injected the digital Metro with enough bells and whistles to rival Harry Potter’s Daily Prophet. A tap here, a pull there, rotating the 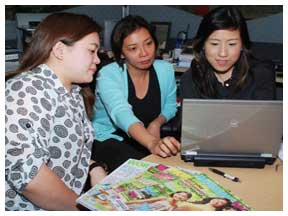 Working Moms editor screen or rubbing an image reveal wonders that will leave even non-techies oohing and aahing. On Lopez’s iPad, for example, the 22nd anniversary issue of Metro came to life—the reinterpretation of seven iconic covers were revealed simply by “erasing” the image on top with the fingertips.

Meanwhile, the May 2010 launch of API’s newest baby, Vault, at the Members Only club in Bonifacio Global City was distinguished for being the first time in Philippine history that a print product was unveiled at the same time as its digital counterpart. 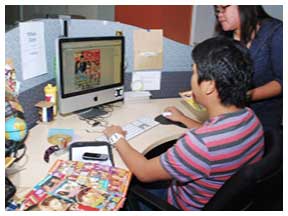 The Buzz magazine Editor“Even though we have a digital edition, people like this,” Lopez said of the print version. “It looks more like a book than a magazine. It has rounded edges so it doesn’t tatter easily, and then there’s the size. The first thing that strikes people is the size—it’s original.”

Digital reproductions of Vault are available on the mobile reading app Zinio (http://sg.zinio.com/) for SG$3.69 (about P130).

According to Lopez, Vault is one of the magazines that API will use to go regional. The company’s foray into the digital arena is a major step toward this goal. The idea is that once the magazine is downloaded on Zinio, “it can go anywhere.”

“I’m very excited to come out with several more new products that are innovative, that are creative, that showcase really how creative the Filipino is. Because when you look at Vault, it broke all the rules,” the API head said.

Lopez is also bullish about API’s future prospects, not the least because for the first time in a long time, the 19-year-old organization is, as he put it, fully loaded in terms of the right personnel.

Then there is the team’s bent for “spontaneous combustion”—an alignment of people and vision that spawns a trademark API product. An example of this was seen when the country was in mourning over former President Cory Aquino’s passing in August 2009. API came out with a magazine and a coffee table book “very, very quickly. Walang tulugan yun. Nakita ko yung talagang out of love for Pres. Cory they came out with a product,” Lopez recalled.

As API pursues its digital dream, they leverage on their synergies with their kapamilya in ABS-CBN, the better to deliver content “through all 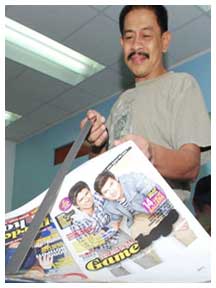 “The company that we’re in— Cable Channels and Print Media Group (CCPMG)—we have, beyond print, we have synergies with cable, we have synergies with our events, we’ve so many different kinds of synergies going on throughout the company. The fact that magazines are no longer just a static medium is an advantage because since we’re part of ABS-CBN, the expertise for doing is already regimen in the organization and there’s institutional learning already for that.

“It’s really being part of a family, kapamilya mo. In the end, it’s your family members that you rely on, right?” Lopez added.

CCPMG, which also includes Creative Programs Inc. (CPI), is the fusion of ABS-CBN’s cable and print businesses. CPI offers programming that addresses the upscale market’s need for personalized viewing through channels like Velvet, Lifestyle Network, Myx, Cinema One and Balls.

“The challenge now is to come up with content. It’s always the battle cry. You have to do things differently and that’s what I’m excited 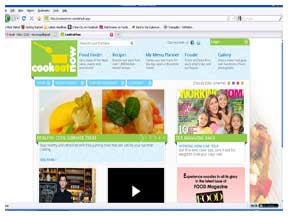 CookEatNow Website about; I’m excited to see what the people in this company are going to do next, what kinds of projects they’re going to come up with next. I feel that we’re perfectly poised to take advantage of all the opportunities in front of us, especially in the digital world,” Lopez said.