SilveRadyo: The silver age of DZMM 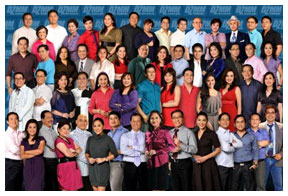 DZMM AnchorsWhen all else fails, there’s always DZMM—this is something most Filipinos know, having had DZMM prove this over and over again in the past 25 years. After all, who can forget that in the aftermath of typhoon Ondoy, DZMM was there with its Kapamilya, Shower Na, the shower-in-a-van setup that was a tremendous help in restoring the equilibrium of the famously fastidious Pinoy?

That endeavor in 2009 earned the goodwill of the populace and harvested several awards for DZMM Radyo Patrol 630. Kapamilya, Shower Na also became the catalyst that spurred DZMM to further boost its public service efforts as it celebrates its 25th anniversary this year.

Kicking off the official DZMM SilveRadyo celebration was the launch of a new station ID on June 12 featuring singers Erik Santos and Angeline Quinto, backed by the UP Concert Chorus and the Philippine Philharmonic Orchestra under maestro Olivier Ochanine. “It is a first in Philippine radio to have the anthem performed by a 60-piece orchestra and a 20-piece chorus,” said Peter Musngi, the veteran broadcaster who heads ABS-CBN’s Manila Radio Division. 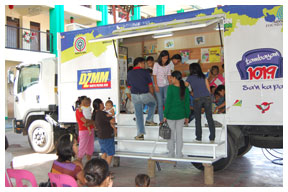 The TLC truckDZMM anchors meanwhile will show off their musical side anew in a concert at the Araneta Center to be mounted in December. The extravaganza is a reprise of 2004’s “Musikasaysayan,” which saw the transformation of Ted Failon, Korina Sanchez, Julius Babao, Tintin Bersola-Babao, then Vice President Noli de Castro and even Santos-Concio into crooners for a night.

In the 25 years that DZMM has been around, it has spearheaded hundreds of medical missions, seminars, business and livelihood workshops, mass 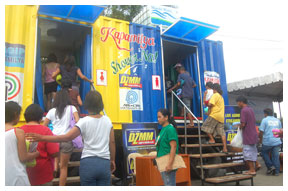 Kapamilya shower christenings, disaster assistance and rescue efforts, in addition to the annual fun run for a cause, Takbo Para sa Kalikasan.

Inspired that “a simple idea can really touch the lives of people” as proven by their Ondoy experience, Musngi and his team decided to put together a classroom, library and clinic on wheels. DZMM Teaching, Learning and Caring (TLC) was soon launched, with ABS-CBN president Charo Santos-Concio, anchors Failon, Ariel Ureta and Bernadette Sembrano accompanying Musngi and a group of volunteer doctors and teachers on the very first outing of TLC in Angono, Rizal in November 2010.

DZMM is also playing an important role in setting up a help desk for ABS-CBN, a corporate incarnation of its own Aksyon Ngayon daily public service program. On the infrastructure front, a stronger DZMM is in the offing as the station works to double the strength of its signal on radio.

TLC Mobile classroom“We’re treating this milestone as a watershed and a great time to review everything that we’re doing. There have been moves that were quite unexpected, coming from DZMM,” Musngi reflected.

There was, for one, the 2007 introduction of TeleRadyo (SKYCable Channel 26), where programs were aired simultaneously on radio and television. The old hands initially reacted violently, apprehensive about being visible to the listeners as they went about their business in the announcer’s booth and losing their mystique.

“The magic of radio is you perceive it according to how you imagine it, and so when the listeners see it they think ‘OK, so that’s what it’s like.’ But we were able to prove that it wasn’t so bad to show that on TeleRadyo,” Musngi said.

With TeleRadyo now available on 278 cable companies in key cities nationwide, DZMM is heard over a larger portion of the archipelago. Last year, The Filipino Channel (TFC) picked up TeleRadyo itself—instead of just the audio which it had incorporated in its programming beginning in 2001—giving DZMM an even wider swath of the overseas Filipino listenership. “TeleRadyo is now in the Middle East, Europe, Canada, Japan, Australia and the US— all over. It’s on TFCNow! which is radio-video-on-demand.

Whether you have TFC or not, you can go online and get TeleRadyo,” Musngi said.

DZMM personalities take their final bowThis and DZMM’s online presence through social networking sites such as Twitter and Facebook have encouraged listeners to flood the sites with requests for songs and greetings. Every so often, a distressed kababayan abroad would even send an SOS, detailing stories of unpaid wages and abuse. DZMM works with ABS-CBN Integrated Public Service, the ABS-CBN News bureau chiefs and TFC to bring these cases to the attention of the proper authorities, in some instances hustling things up by coordinating with embassy personnel themselves.

“It works because it is ABSCBN DZMM that’s calling you,” Musngi pointed out. “We have many such stories of helping Filipinos abroad, but we don’t always publicize them. But it’s something that we do on a daily basis.”

Where the ‘Millennials’ are

DZMM websiteAt DZMM’s headquarters at the ABS-CBN Broadcast Center, a team of some 85 people works mostly behind the scenes, ensuring the smooth operation of both DZMM and FM station DWRR Tambayan 101.9. In practice, this includes DZMM Radyo Patrol 630, Tambayan 101.9, TeleRadyo and Tambayan TV, plus a website for each station—24/7. All these wouldn’t have been possible if the team didn’t do what it had to do, and on a daily basis at that, Musngi said. At the same time, the employees are also broadening their horizons, enhancing their skills to become experts in two platforms.

“It takes a very good team to be able to execute all the plans that you have. The rule is, either you know how to multitask or you’re not part of us,” the DZMM chief laughed. “Our news writers are the ones updating the headlines on TeleRadyo, Production is the one putting in the text messages and the peso-dollar conversion rates, and so on.”

Even as he himself is on the brink of retirement, Musngi is also anticipating the new and exciting directions that DZMM will forge in the next few years. Going where the “Millennials” (as the new generation of young people are called) are remains the all-important goal.

“That’s why we have a website, that’s why we’re available on video-on-demand, that’s why we need to inject a lot of user-generated content. But there are still lots of ways to make radio current, as well as all the services and programs that we provide,” Musngi said.

“We have conquered radio, we have conquered TV. But for us in radio, the work is never done. We have utilized all available media, not only for us to grow, but also for us to maintain the leadership position that we have.