A decade of Asian Eye

Asian Eye Anniversary LogoThe story of Asian Eye Institute started out as the story of two men. One was Oscar M. Lopez (OML), chairman emeritus of the Lopez Group, who for almost a decade in the 1990s had to regularly make the pilgrimage to the United States to avail of treatment for his glaucoma. The other was Dr. Felipe Tolentino, a multi-awarded Filipino-American ophthalmologist and the founder of the Ophthalmological Foundation of the Philippines.

They staked out their “territories,” with OML working in the Philippines and Dr. Tolentino in the US to gather the necessary support and doctors to make their vision of a “center of excellence in eye care in the Philippines” a reality.

Asian Eye’s main clinic at the Phinma Plaza in Rockwell Center opened its doors on September 18, 2001. The center today is eyeing new

Accreditation Canada Logo satellite clinics in addition to those in Trinoma mall in Quezon City, opened in 2007, and the SM Mall of Asia in Pasay, opened in 2008. The flagship itself has burgeoned to include a total of three floors in Phinma Plaza.

Asian Eye was a philanthropic endeavor for OML and Dr. Tolentino as well as the corporates, foundations and individuals who backed them.

“Our status when we started was that of a corporate social responsibility project. We are still genuinely trying to uplift the practice of excellent eye care, to make world-class eye care available to as many Filipinos as possible,” Asian Eye president Benjamin K. Liboro told LopezLink. However, financial independence was also a goal, to ensure sustainability of the social benefits. 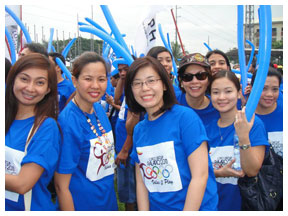 Asian Eye Team during Lopez PalaroBut having achieved profitability in the last four years, Liboro and vice president and general manager Bunny Peña- Gerochi now have a bit of elbow room to intensify efforts towards bringing off a second objective.

According to Liboro, anecdotal evidence indicates that there are more than 200,000 Filipinos afflicted with cataract, and the number continues to grow. This means “200,000 people who could be productive but are less than fully productive because they can’t see well; and it’s not as if it’s an impairment that cannot be reversed or arrested, it’s treatable.”

“Affordability is something that we want to really study, to make ourselves more accessible to more of the market,” affirmed Peña-Gerochi. Soon, private patients may even have the option of tailored service options. As in an airline, Peña- Gerochi said, the idea is for clients to ultimately arrive at the same destination regardless of whether they flew business class or economy.

For the 10-year-old center, quality and excellence remain paramount. In fact, these are virtual watchwords for both Liboro and Peña-Gerochi, who also lead the Lopez Group’s Business Excellence program.

In the past year, Asian Eye has been putting in place certain safeguards to guarantee patients’ physical well-being and emotional comfort. This enhancement is aligned with the center’s bid to secure international accreditation. It is one of a handful of Philippine institutions— and the only ambulatory center—to undergo the process under Accreditation Canada International. Also taking part in the Asia pilot were Manila Doctors Hospital, so far the only other institution that has been granted accreditation, Clinica Manila and Philippine Heart Center. Among other benefits, international accreditation will effectively propel Asian Eye to Canadian hospitals’ virtual master list of institutions that can accommodate Canadian patients, thereby reducing the strain on their own overloaded medical system.

“When we did this,” Liboro said of the accreditation, “it was really to make sure we were world-class in the way we operate Asian Eye.” 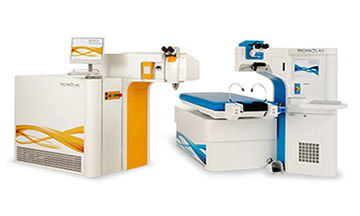 Asian Eye Lasers
At some point during the months-long process, Accreditation Canada prodded Asian Eye to give more prominence to the fact that “patient safety was one of its priorities.”

Preparations to meet global patient safety and health quality standards paid off. In August, Asian Eye received its Platinum accreditation from Accreditation Canada. This makes Asian Eye the first and only ambulatory health facility in the Philippines to have international accreditation.

“The journey was well worth it for us. It really improved teamwork and communication, which are so essential to patient safety,” said Pena-Gerochi. “We also had to consider patient privacy and full transparency. But patients in the Philippines are not yet used to having all these rights. For example, because of the accreditation we made certain changes to our procedures, such as giving them a choice to be called by name or by number, if they don’t want their name broadcast. Some are very receptive but others still prefer what they feel is more personal.”

But even as patients occasionally grapple with the streamlining, they have also been at the receiving end of other less obvious improvements, all aimed at enriching their Asian Eye experience. 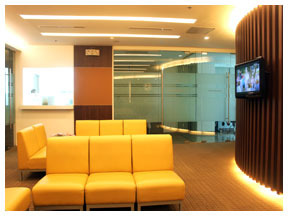 Asian Eye OfficeThe quality of the wait has been enhanced, with Asian Eye providing monitors and headphones so patients can browse through a variety of health topics, especially advances in eye care. For those who are content to simply sit and wait, there are TVs to help pass the time. A kids’ room has also been set up to separate them from antsy seniors, who make up the bulk of Asian Eye’s patients. Perhaps most welcome of all, the ninth floor clinic has been renovated to reduce noise levels.

“When you’re worried about your eyes, the last thing you want is a lot of noise around you,” Liboro observed. “The original clinic didn’t really take noise attenuation into account. The materials used, the tiles, basically the reflectivity of the walls, the glass—all it did was make the whole thing sound like a market.”

Tech-wise, Asian Eye has dibs on the pole position, counting among its latest acquisitions a combination laser from German company Technolas Perfect Vision, which is affiliated with Bausch & Lomb, an excimer laser and a femtosecond laser for reshaping the cornea. The latter, which only Asian Eye has, is used to treat both presbyopia and myopia, said Peña-Gerochi.

For all these reasons, Asian Eye stands out because of the quality of eye care it offers. “I think we compare with the best in the world,” Liboro stressed. “Asian Eye has adopted the thinking of the Lopez Group in terms of quality and people,” said Peña-Gerochi. “Quality is an investment, people are an investment. We make sure that just as our facilities and our technology are upgraded, so is our standard of quality, our people, their training and competence.” 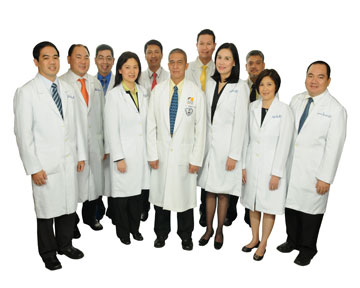