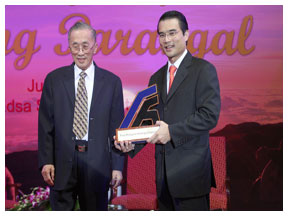 Oscar M. Lopez and Federico R. LopezFirst Philippine Holdings Corporation (FPH) turned a venerable 50 in June this year, and the celebration is far from over.

On September 21, 2011, chairman Federico R. Lopez (FRL) and chairman emeritus Oscar M. Lopez (OML) waxed nostalgic at the company’s appreciation cocktails held at the Makati Shangri-La. At the same time, the evening’s theme—“Braving New Horizons”—served notice that FPH was looking ahead to the next 50 years even as it reflected on the past 50.

FRL paid homage to Eugenio H. Lopez Sr., founder of FPH under the name Meralco Securities Corporation (MSC). The elder Lopez’s purchase of Meralco, for $62 million, was “the largest purchase in the region at that time.” The former sugar baron had earlier made bold and pioneering forays into the media and transport industries.

“It amazes and at the same time terrifies me when I consider the breadth and scope of businesses my grandfather, Eugenio H. Lopez Sr., brought us into. … Back when those decisions were being made to invest millions, he was, more often than not, the pioneer at a frontier that had sparsely been walked on by Filipinos. So I ask myself at the dawn of our next 50 years, but with a note of awe and admiration: Lolo, how on earth did you do that and what were you thinking?”

The answer is in the founder’s patriotism, his abiding love for country that drove him to enter industries vital for the nation’s development. 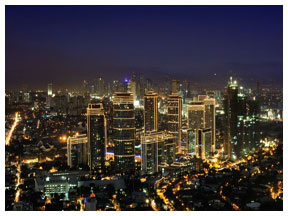 Rockwell Land This led him to pioneer such enterprises as to provide services at the high levels of quality that he believed his fellow countrymen deserved to experience.

“FPH’s inception as MSC in June 1961 was a visionary leap on the part of my grandfather. Pole-vaulting from the sugar industry he knew so well and into the unfamiliar power generation and distribution industry previously controlled by the Americans was nothing short of bold and insightful. It would be the start of our family’s historical romance with businesses of national significance engendering public service,” FRL said.

MSC, created on June 30, 1961, owned two billion-peso companies before it had reached its 10th anniversary. One was Meralco, which MSC had purchased from General Public Utilities in 1962, and the other was the Philippine Commercial and Industrial Bank, acquired in 1967.

The painstaking task of turning FPH around, carried out over a span of 25 years, “have constituted the bulk of [my] life’s work,” OML observed when he was conferred the Ramon V. del Rosario Award for Nation Building in August 2011. “We felt very strongly that the businesses our father had originally created were worth preserving, even if we had to rebuild them from scratch, brick by brick, all over again. Eugenio H. Lopez Sr. demanded the best of his businesses, because he felt that the Filipino people deserved only the best. That philosophy or tradition is something that we have tried to honor, preserve and enrich over our own lives’ work.” 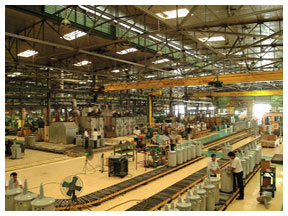 Transformer manufacturer Philippine Electric CorporationOML’s reminder: “In the process of building what was then the country’s largest conglomerate, my father taught us his children and his employees that in the Lopez Group, our primary reason for being is to serve the Filipino people. He called it ‘eternal allegiance of service.’ He taught us to be always mindful of our obligations to present and future generations of Filipinos.”

The Lopez philosophy in business is anchored on the value of stewardship, wherein as “caretakers” of the companies, OML said current leaders are behooved to bequeath them to the next generation in a much better shape than that in which they found them.

“May the next 50 years of First Philippine Holdings be as committed to public service and national development as the first 50. May the generations of FPH leaders yet to come always keep the faith in our values,” OML said.

Despite the festive celebration, the lessons of the very tough decade just prior to FRL’s election as chairman of FPH are worth recalling.

“We faced an extremely hostile political environment as well as debt problems in FPH, and throughout the Lopez Group, at a time when global financial markets were reeling... But through force of circumstances and OML’s decisiveness in the face of some very tough choices he simultaneously solved the Lopez group’s debt problems and gave it a new life. However, it’s not like we embarked on a totally new direction overnight. I think it’s important to point out that even while we were tackling those major problems besetting the group, we never ceased building and strengthening the various core business platforms of FPH,” said FRL as he called attention to the company’s current portfolio of best-in-class assets.

First Gen has the largest portfolio of power generation assets in the country using indigenous and clean energy. “Our geothermal acquisitions have also given us a ‘35-year head start’ in integrated geothermal power development.

In fact, being the largest integrated geothermal power producer in the world today gives us unique skills we can take to new markets abroad that are urgently in search of more indigenous, low-carbon alternatives.”

First Philec Solar is among the best producers of silicon wafers for the growing global photovoltaic (PV) industry. “Today we supply some of the world’s leading solar PV companies, helping them to improve performance efficiencies and drive costs down in their quest for grid parity.”

First Philippine Industrial Park (FPIP) is a platform to attract firms to invest and locate their manufacturing businesses in the Philippines and make it easy for them to access the best resources the Philippines has to offer.

Rockwell Land continues to raise the bar for real estate development in the country. “Although we’re the new kid on the block and have many bigger, better- financed competitors, we’ve built a brand synonymous with success and high-end quality. We’d like to continue building on that success profitably.”

These business platforms are among the best in the country at what they do. “I expect that if they continue to be well positioned strategically they will drive our direction and investments in the years to come.”

As FPH entered its 50th year, the divestment of major investments in regulated monopolies such as Meralco and Manila North Tollways Corporation meant all its remaining businesses must compete for the attention of customers locally and even globally: First Gen in power generation, First Philec in manufacturing, Rockwell Land and FPIP in property, and First Balfour and FPIC in infrastructure. As retail open access—a system where consumers can choose their electricity supplier—takes effect in December this year, FPH girds up for even tougher competition by harnessing its arsenal of efficient and price-competitive assets.

“Everything we’ve done in the last few years has been in preparation for that,” FRL said.

Since the acquisition of Energy Development Corp. (EDC) in November 2007, the FPH team focused on enhancing its value and revving it up to its full potential. “At about the same time we were getting through the major hurdle of normalizing First Gen’s post-acquisition finances, we were also acquiring the remaining NPC (National Power Corporation) power plants that were utilizing EDC’s geothermal steam. Having accomplished this with the purchase of Palinpinon, Tongonan and Bacman, we are now completing their rehabilitation as well as that of our steam fields so we can bring up their collective capacities by another 435MW by 2012,” said FRL.

This has transformed EDC from merely being a steam provider to a single customer (NPC), to one that now sells electricity further down the value chain to cooperatives, utilities and even industrial end-users. “In the process, we’ve also turned it into the largest integrated geothermal company in the world! The next few years should see us developing close to 250MW more of power plants and steam fields from already discovered reserves of EDC. This year we are also planting the seeds to take our geothermal development capabilities overseas into other countries within the Pacific Ring of Fire, particularly Chile and Indonesia. We have established offices in those countries and are vying for concession areas as well.”

With this deliberately focused approach and an enviable portfolio of globally competitive assets, the next 50 years could very well be as exciting as the last 50 for FPH, if not more so.