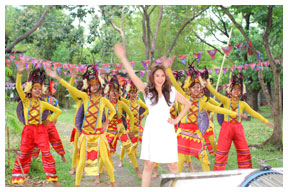 The ABS-CBN summer station ID (SID) has become the harbinger that assures us that the glorious, seemingly endless days of sun, sea and sand are once again upon our 7,107 islands. Yes, summer now means sun, sea, sand and SID.

We all have our favorites. Some might have fond memories of one of the earliest summer SIDs dating back to 2002. Your pick could be the one where the Kapamilya talents showed off their skills in Filipino street games in 2004. Most everyone would agree they were brilliant in bringing in the noise in 2005, strutting like a champion pep squad in 2008 and letting loose on trampolines in 2011—all against the backdrop of the best Filipino traits and traditions.

This year, ABS-CBN boldly proclaims “Pinoy summer da best forever” as it paints a picture of how Filipinos are proud of their heritage—and values like bayanihan, camaraderie, unity, respect and love for one’s self—as reflected in traditional summer festivals. 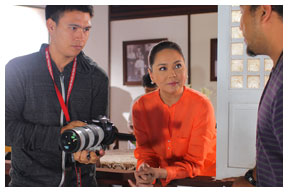 Ai-Ai delas Alas wows the crowd as she rides her float in the Panagbenga Festival. Angel Locsin epitomizes the charming Filipina, who persuades the killjoys to join the festivities. Cliff diving has never looked more tempting as Piolo Pascual jumps off the rocks to retrieve a friend’s valuable that fell into the water.

Bea Alonzo and plus-sized majorettes redefine sexy as they lead the marching band with confidence. Erich Gonzales cheers for a girl in a palo sebo contest while KC Concepcion plays with fire as she tries poi dancing.

This year’s theme song, “Pinoy Summer Da Best Forever”— with its infectious “E yo, e yo” chorus—is performed by Sarah Geronimo and Gerald Anderson with lyrics by Christine Daria-Estabillo and music by Marcus and Amber Davis.

SIDs are among the audiovisual treats churned out by ABS-CBN’s Integrated Creative Communications Management (ICCM) division. The group, composed of less than a hundred, mostly-twentysomething creatives, is tasked to promote the overall image of ABS-CBN creatively through trailers, AVPs, theme songs and plugs, said ICCM head Robert Labayen. 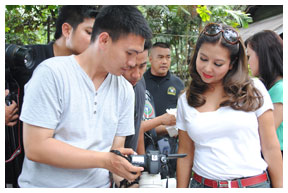 As Zabat put it, Team ICCM is the one filling in the gaps between the telenovelas, news programs, sitcoms and noontime shows with their “short films.” As with the commercials in his and Labayen’s former world, their aim is to “enchant in 30 seconds,” Zabat said.

With the annual SIDs’ “big reveal” comparable to the anticipation for the Super Bowl among American football fans, what does it take for Team ICCM to keep surprising us? After all, how many variations can be done on the summerand- the-sun-sea-sand theme, on Christmas and its parol and puto bumbong? What’s the secret sauce? 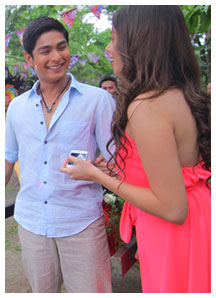 “Walang Hanggan” stars Coco Martin and Julia Montes share a sweet off-cam moment“That’s the exciting part,” Labayen laughed. “Our theme for the past few years is ‘Da Best.’ For this summer, we thought, what are the summer things that are uniquely Filipino? At the same time, we followed the ‘Da Best’ theme of the company which Team ICCM also develops every year.”

When it is called for, ICCM calibrates the SIDs to respond to specific events or situations, such as typhoon Ondoy in September 2009. What was supposed to be a nod to that season’s top-rating show “May Bukas Pa” became even more relevant, more meaningful when it was tweaked to reaffirm Filipinos’ faith and reassure them as they struggled to rebuild their lives after the calamity.

Collaborating with Labayen’s team on the SIDs—aside from summer, there are also SIDs to mark the start of the year, the rainy season and Christmas, in addition to seasonal, one-off campaigns—are ABS-CBN Marketing led by Cookie Bartolome and Zita Aragon.

So there it is: Follow the annual theme, look for a new spin, and think of what’s relevant to the Filipino.

Labayen supplied the lyrics for the now-classic “Star ng Pasko” for the post-Ondoy Christmas SID, “Da Best ang Paskong Pilipino” for the 2011 Christmas SID and “Piliin Mo ang Pilipinas” for Choose Philippines, among others. But in his division, songwriting duties and much of everything else are really up for grabs—anyone who wants to take a shot can do so. 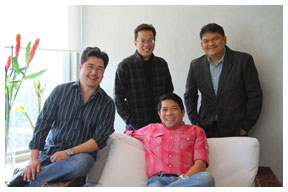 “The Happy Bosses” of ICCM, clockwise from left: Ira Zabat, Johnny de los Santos, Patrick de Leon and ICCM head Robert Labayen“Even if it’s not their job to write a song or compose music, they just do it. They’re excited,” Labayen said of his young and talented team. “Not only are we able to save because we do almost everything in-house, but it’s a cause of happiness as well. Gustung-gusto nila yun.”

“This is not one of those workplaces where someone would complain, ‘That’s not in my job description,’” Entertainment Promotions’ De los Santos added.

De los Santos, a homegrown Kapamilya, considers ABS-CBN as “one big playground” where, as a production assistant in the 1990s, he was able to dabble in everything and anything that aroused his curiosity. Prodded by Labayen, he recently tried his hand at directing and music production. 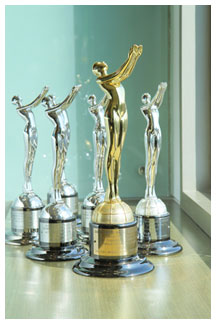 Some of the international creative awards won by ICCMThis teaching and learning culture has also given rise to the division’s own version of TEDTalks—CSI (see sidebar), where the team members can sharpen their skills, learn new ones or, if one is up to the challenge, even be the presenter.

Perhaps the patented formula works even more effectively because ICCM is a “very happy department,” one so exuberant that even ABSCBN president Charo Santos- Concio once took notice.

“Everybody is engaged and happy. If they feel that they can compose a song for the SID or if they can direct… it’s like they see that they can actually realize their dreams. ICCM always encourages that,” New Media’s De Leon agreed.

Indeed, if Disney World is known as “the world’s happiest place,” then the ABS-CBN equivalent would have to be ICCM.