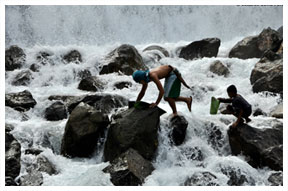 Young boys make their way across Cantingas River in San Fernando, Sibuyan Island. Cantingas, one of the cleanest rivers in the country, offers an adrenaline rush by way of a double-direction zipline and a three-level diving ledge. ABS-CBN Foundation Inc.’s environmental arm Bantay Kalikasan (BK) has found paradise and they would like you to visit.

Sibuyan Island, one of the three major islands making up Romblon province, is BK’s latest baby. On the map, it lies at the center of the center of the Philippines, a bean-shaped mass ringed by Luzon, Panay and Mindoro. The island has never “been connected with any part of the Philippine archipelago”— it was formed when “seismic forces pushed up a 2,000-meter peak from the earth’s crust, forming a series of smaller peaks.” This is why Sibuyan’s treasures, which include dozens of endemic plant and animal species within its 445-square kilometer area, are truly its own, not to be found anywhere else in the Philippines or even in other parts of the world.

Nature lovers looking for a detour from the commonplace will thrill at Sibuyan’s abundant assets, as did AFI managing director Gina Lopez when she first set foot on the island a year ago.

Lopez heard of Sibuyan, said to have “the world’s densest forest and the country’s cleanest inland body of water,” from Rodne Galicha of the advocacy group Alyansa Tigil Mina. She also learned that mining all around Sibuyan had been approved.

The AFI chief had thrown her lot with the anti-mining side following the killing of BK’s former program director,Dr. Gerry Ortega, in January 2011. However, as early as 2008, BK was already developing ecotourist sites in mining areas, beginning with Palawan. Its goal was twofold: to offer an alternative that puts money in the pockets of the locals and, at the same time, preserves and protects the environment.

Ecotourism, “the practice of touring natural habitats in a manner meant to minimize ecological impact,” has been BK’s main advocacy in the last few years. In a way, the rehabilitation of La Mesa Watershed and La Mesa Ecopark was the organization’s first ecotourism project; Bantay Kalikasan was actually created in 1999 to spearhead the gargantuan task of reforesting and bringing the 2,700-hectare area back to life.

At OlangoSibuyan Island became the group’s newest ecotourism destination after the sites in Bicol; Puerto Princesa, Palawan; and Brooke’s Point, Southern Palawan. The latter hosts the BK Eco Academy, which offers classes on environmental preservation and awareness; the school is also where one can get a taste of a unique camping experience—“glamping” (see sidebar).

Asked what sets Sibuyan apart from their previous ecotourism efforts, Lopez was quick to reply: “I find the place especially majestic, maybe because it’s been so isolated from the rest of the world. You can’t easily go there—there is no airstrip and the sea travel is very, very uncomfortable. The people live in majesty but they are poor. There is no bank, no hospital, which is part of its charm.”

In trademark AFI fashion, things got rolling—and swiftly. Together with Puerto Princesa Mayor Edward Hagedorn and members of civil society, the academe, nongovernment organizations and the clergy who made up the Save Palawan Movement, Lopez worked on plans to build up Sibuyan into an ecotourism site.

With project manager Danilo Intong onboard by October 2011, the fourth BK ecotourism project was formally unveiled in May 2012 through a soft launch and a ribbon cutting celebration.

According to Lopez, visitors can trek forest trails and indulge in a spot of bird watching and cap it off with an
energizing dip at the Dagubdob Falls in San Fernando, Sibuyan’s biggest town. There are cabanas for rent at every level of the four-level waterfall, while the residents will prepare sumptuous meals featuring the freshest local ingredients. 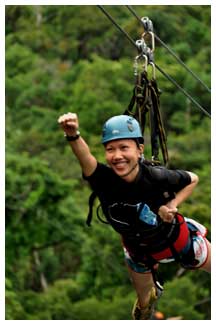 She added that the waters of Cantingas are odorless and flavorless because it is one of the cleanest rivers inthe country (Lopez herself has tried drinking the water right out of the river for a quick picker-upper). It offers twice the fun with a double- direction zipline—or you can just dive in from the threelevel diving ledge which goes up to 36 feet high! If you’re a sucker for white sand beaches and coral reefs, you can go to Cresta de Gallo, some 45 minutes away by boat from San Fernando. Bring tents and grub and you’re set for an all-day picnic.

For those who prefer to keep dry on terra firma, Lopez recommended taking to the trails on bikes or all-terrain vehicles to see biodiversity areas or just gallivant around the island: “Sea and mangroves on one side, forest and rice fields on the other,” she said. 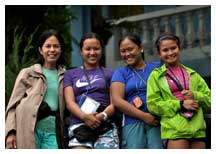 The Bantay Kalikasan ecotourism group’s Precious Reyes, Darryn Castillo and Meggie OchoaThe AFI chief, whose team’s cleanup of the Pasig River through Kapit Bisig Para sa Ilog Pasig is also in full swing, pointed out that the foundation works with the concerned communities to lay out some ground rules prior to embarking on a project; a code of ethics is also SOP.

She added: “Management is key to the success of the project—management and integrity, especially with money.” As with BK’s other ecotourism sites, the net revenues go solely to the community members.

Lopez is not sure just how many times she has been to Sibuyan Island since May 2011. Last December, she even took her family along to celebrate her birthday on the island. Still, nothing beats her favorite Sibuyan moment: “When I first got there and when took a dip in the river and then in the waterfalls, it was magic, sheer magic.”

And the magic continues— in the locals’ new skills and improved lives as they work with Mother Nature, 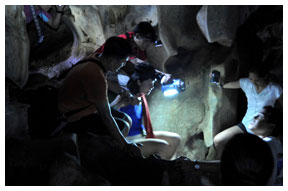 AFI Managing Director Gina Lopez in Ilaya Cave theadditional infrastructure, and a host of other benefits.

“Every time I go there and I see improvements—forest trails and pathways set up, the community learning how to take care of visitors, the happiness of the people there and the knowledge that their lives are improving—it makes me so very, very happy,” Lopez said.