How SKY got its growth back

How SKY got its growth backImagine what you can do with cable TV that you can tweak according to the state of your pocket or the schedule of Iker’s games—fringe benefits that would have been unthinkable just four years ago.

“That’s one of our success stories. When we take it out, we can’t do all of those,” Rodrigo Montinola muses.

The chief operating officer (COO) is referring to the wideranging digitization program that SKY—the company behind SKYcable, SKYbroadband and SKYvoice—rolled out in Metro Manila in 2009. As of May 2012, the Metro Manila network is practically 100% digital enabled, says Montinola, who headed SKY’s Marketing Division before assuming the COO post in 2011.

SKYcable then took its digitization efforts to Cavite, Laguna, Bulacan, Cebu and Davao in 2010, while Baguio, Bacolod and Iloilo are slated to join the ranks of the digitized areas beginning in September 2012.

About 70% of SKYcable’s existing pay TV subscribers now also use the DigiBox that allows them to receive digital satellite TV broadcasts, up from about 60% in 2010.

“Digitization has really done wonders for our cable TV business,” the COO shares. “Our growth as far as
postpaid subscribers are concerned has been in the low double-digits in the past two years. This has come, in context, from a flat or declining trend in the three years before that, in 2007, 2008 and 2009. Beginning in 2010, 2011, we got the growth back.” 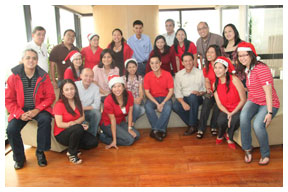 Managing director Carlo Katigbak with the rest of the SKY Management Team SKYcable 499; SKYcable Select, which allows subscribers to add channels individually or in designated packs to their basic plans; and SKYcable HD, the first high-definition TV service in the country, now with 17 full high-definition channels. Currently, SKYcable HD offers the most number of HD channels plus HD coverage of big-ticket sporting events such as boxing matches, UAAP basketball seasons, the Olympics and more.

According to SKY Marketing Division head Alan Supnet, SKY Cable is also the only company that offers the personal video recorder or PVR device—the SKYcable DigiBox iRECORD, which lets viewers to take total control their TV viewing through features that allow them to record and play back programs and even pause the live program they’re watching.

“These value added services— Select, HD and iRECORD— continue to set us apart from our direct competitors. It strengthens our proposition that’s hinged on SKYcable being the only service provider that offers digital cable TV provider beyond clear signal. Of course, content- wise, SKYcable still leads the pack because of its unparalleled initiatives done by our Programming Group, coupled with our relationship with ABS-CBN,” says Supnet.

“A large part of what differentiates us with regard to pay TV is our strong partnership with ABS-CBN,” Montinola affirms. “We have channels from ABS-CBN that are not available with other providers, like ANC, Lifestyle Network, Balls, Cinema One and TeleRadyo. These are very strong channels that are always in the top 10 or top 20 channels, even compared to foreign channels.” 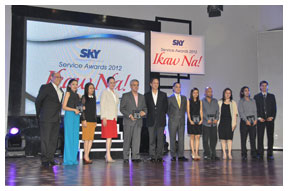 Claudia Suarez, head of Program Packaging and Merchandising, adds: “We have focused in obtaining all the movies, sports and kids’ channels that are the most relevant and most-watched by our subscribers. We have good partnerships with Creative Programs Inc., HBO and Fox International Channels, enabling us to have 90% of all the movie channels available on the market.”

SKYcable also has the most number of sports channels in the Philippines with Balls HD, NBA Premium HD and ESPN HD driving a big portion of the company’s HD growth. And this being the Olympic season, SKYcable is now offering the SKYcable Season Pass. For P2,500, viewers can watch the games, currently ongoing in London, 24/7 on two dedicated HD channels or in standard definition.

Through chief financial officer Eloisa Balmoris, SKY also rolled out an aggressive expansion program. In 2004, it acquired Home Cable’s assets, and more recently, those of Destiny Cable, Solid Broadband Corporation and Uni-Cable TV Inc. Meanwhile, a major development was Singapore’s STT Communications Ltd. acquisition of a 40% economic interest in the company in 2011.

“With our acquisition of these assets, SKY is indeed committed to growing the business,” Balmoris says.

Imagine what you can do with internet that’s as fast as what the best of our Asian neighbors can offer!

When it comes to internet service, SKYbroadband keeps a firm hold on its “fastest residential internet in the

At the SKY headend Philippines” proposition with its Plan 112 Mbps. This is currently offered in Rockwell Center, Forbes Park, Urdaneta, Dasmariñas and Ayala Alabang villages, with more locations to be added soon.

Also in the pipeline is a blazing 200-Mbps offer, which Montinola says is currently in the testing stage.

While the telcos and DSLs have a five-year head start in building their subscriber base vs. SKYbroadband, it nevertheless is poised to further make its presence felt in the Philippine broadband industry. Integral to the strategy is to leverage on the positive image of SKYcable as a “friendly, entertaining brand” and the market leader in pay TV to lure prospective subscribers. And unlike the competition that takes a week or even a month to hook you up, SKYbroadband pairs its fast internet with even more expeditious service.

“SKYbroadband’s positioning is speed and quality,” notes Montinola. “We have a strong equity and product advantage in wired broadband so we’re focused on that.”

Those in the market for a home internet service provider and especially those already on DSL can see for themselves how fast SKYbroadband is with the company’s free 15-day trial offer.

“SKYbroadband guarantees to get you connected within 48 hours—faster internet plus faster service,” Supnet, a 15-year veteran of a pioneering telco who joined SKY in May 2011, emphasizes. “Our conversion rate is high. When people get to try it, more often than not, seven out of 10 would eventually subscribe.”

Last year, SKYbroadband pioneered a consumable or usage- based plan, the 5 Mbps plan for P999 a month, which comes with a monthly 15-gigabyte (GB) usage allowance. A relevant product borne out of research learning which indicates that users “like faster speeds” but “don’t want to pay more than P1,000.”

“This is a paradigm shift because people are so used to unlimited broadband plans. But we believe this is the right way to go as bandwidth is becoming an important resource that needs to be managed. More importantly, this is really for the users, to give them a lower-priced plan at a faster speed,” Montinola points out.

“For the users” is a mind-set that SKY upholds vigorously, believing as it does that customer service should be given enough focus locally, not only in its industry but in other industries as well.

Under Montinola, SKY in the medium term aims to go beyond market leadership in pay TV and capturing an even bigger slice of the wired broadband pie.

“We expect that we’ll remain the dominant player as far as pay TV is concerned, and obtain a much stronger position in the wired broadband service category; we have an advantage because we’re focused on wired broadband. We believe there’s still going to be that segment of the market that will stay with wired broadband,” Montinola states. “Most importantly, we want to be seen and recognized for our outstanding customer service.”

A SKY lineman at workThis year, the company started conducting monthly customer focus sessions to reorient employees to think of only one customer—the person at the top of the food chain, so to speak.

“Before, the thinking was, ‘I’m in this department, I don’t really have a relationship with the subscriber. I service the Marketing person, I service the Sales person.’ We’re telling everybody, no, look at just one customer: the customer that pays the subscription fees,” explains the COO.

“We always think of the customer,” says Supnet. “What are his specific viewing needs? His distinct surfing needs? Whatever we do in SKY, there has to be an extension of customer focus in our working environment; that is, from the most menial job to the most strategic move that we make.”

A microcosm of this is seen on the company’s Facebook page: a combative customer engages the SKY representative in a lengthy exchange spread out over a few hours, a couple of days. The rep remains unfailingly cool and polite, even when the customer throws in an unprintable or two. Finally, the exchange ends with the customer saying thank you. As another customer put it, “This is what I look for in customer service even in social networking sites, respectfulness.”