For love of nature 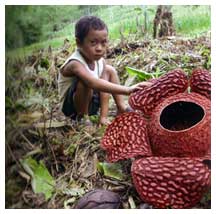 At 70 centimeters in diameter, this Rafflesia schadenbergiana appears a giant compared to the little boy. A bud was hacked during a slash-and-burn operation in the area in the recently declared R. schadenbergiana Critical Habitat Site by the Department of Environment and Natural ResourcesThree Lopez Group companies organized a series of programs and activities related to the environment, along with disaster preparedness, as tribute to chairman emeritus Oscar M. Lopez (OML) and his lifelong environmental advocacies.

The book launch and MOU signing for the establishment of the OML Center were formally announced during a cocktail reception held at the Rockwell Center on August 2, 2012. FPH hosted the event as part of the tribute to OML.

The coffee table book “Generations,” which is published by First Gen, features the beauty and majesty of the 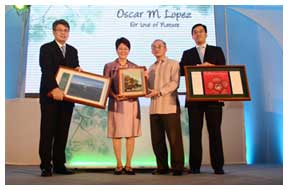 “Generations” is First Gen’s contribution to national and global understanding of biodiversity and, hopefully, their conservation not only for the present but future generations as well.

Federico R. Lopez (FRL), who is chairman and CEO of FPH, said in his foreword for the book that “it is also the purpose of the book—‘Generations’— to demonstrate through words and photos how patiently First Gen is working to preserve our precious environment. After all, no company in the world could claim to be host to at least three charismatic globally important wildlife species—the Philippine eagle, the flying lemur and the tarsier—in two of its geothermal production fields (Mindanao and Leyte), mixed roots of flying foxes in the other three geothermal production fields (Bacman, Northern Negros, Southern Negros) and others that are continuously being documented in the various sites. These species form the core of the company’s Flagship Wildlife Species program, which is being implemented in partnership with the Institute of Biology, University of the Philippines Diliman (IB-UPD).”

First Gen’s Corporate Communications department collaborated with IB-UPD professors, particularly Dr. Perry Ong, to produce “Generations,” along with George Tapan, an internationally acclaimed and multi-awarded photographer. One of Tapan’s prestigious honors came in 2011 when he won the top prize in one category of an international photo contest of the National Geographic.

“Rafflesia of the Philippines: A Story of Adventure, Appetite, and Affinity” written by Mabi David, Julie Barcelona and EDC SVP Agnes de Jesus, stands out as the first book to present the latest taxonomic information on the 10 Philippine species of rafflesia. Some of EDC’s geothermal sites are home to rafflesia, which is known as the largest single flower in the world. A rafflesia flower can measure up to 100 centimeters in diameter and weigh up to 10 kilograms.

“Rafflesia of the Philippines” contains interesting and inspiring stories of the flower’s discovery, its discoverers, 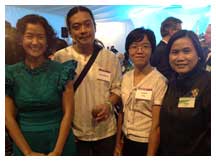 EDC’s Toni Nieva with “Rafflesia” illustrator Yasmin Ong, designer Felix Mago Miguel and writer Mabi David; and man’s relationship with nature. The book brings the reader to the early days of botanical explorations to reveal the appetite of man for adventure and personal recognition.

More than a coffee table book, “Rafflesia of the Philippines” is a good resource material for taxonomists, conservationists and rafflesia enthusiasts. A most significant part of the book is the primer on Philippine rafflesia, which is based on the scientific research and field studies of our Filipino botanists working on this plant.

“Philippine Native Trees 101: Up Close and Personal” is a guidebook replete with photos and descriptions of 108 native Philippine trees. The book, which is supported by EDC, aims to educate Filipinos about native trees and the benefits we get from them. In it, environmentalists, landscape artists, students and other tree aficionados write about their encounters and experiences with native treasures like kamagong, kalantas, bagtikan, batino, marang and mabolo.

First Gen and EDC will donate copies of “Generations” and “Rafflesia” to universities and other institutions, groups, and individuals who are seriously committed to environmental protection and biodiversity conservation.

This, in OML’s case, was farming.

“Unfortunately, in the course of my search for the ideal farming property, my young family, then consisting of my wife Connie and my first two children, Cedie and Cary, and I were involved in a near-fatal plane crash in Bukidnon. Our near escape convinced me that perhaps I was really meant for another profession,” he said.

He continued to nurture his passion for nature in other ways, and met “remarkable people and organizations” along the way, notably Conservation International chairman and CEO Peter Seligmann and the late botanist Leonard Co.

FRL described his father’s love for nature as “infectious,” and it has become “our own mission to inspire current and future generations of leaders at our companies and the communities we touch and to feel the same passion he has—and now we have—for nature and the environment.” 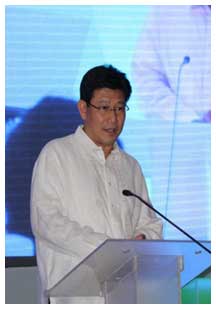 When FPH set up First Gen Corporation as the conglomerate’s power generation arm, environmental activities were incorporated into First Gen’s plans and programs, including the fuel for the power plants and steps to protect the host community’s environment.

Such integration reflects the Lopez Group’s adherence to the concept of environmentalism in business. This concept, which OML has espoused— and which continues to guide the Lopez Group—supports the idea that the long-term viability of a business hinges not on destroying but on protecting the environment.

First Gen and EDC have also integrated into their business a number of activities for the rehabilitation and protection of biodiversity, especially in areas near the host communities of its power plants.

One of their most ambitious environmental projects is called BINHI. A project being implemented by EDC, BINHI aims to reforest 10,000 hectares over 10 years from its launch in December 2008. For 2011, BINHI covered an area of 1,052 hectares in seven sites all over the country with 770,000 different tree saplings.

First Gas also implements its own environmental projects that include a mangrove rehabilitation project in a 9.9-hectare area within its power plant compound in Batangas City. The number of recorded mangrove species in the area has increased from only three in the year 2000 to 29 today. Tree density per 100 square meters has almost doubled to 37 trees per 100 square meters from 14 in 2000. The mangrove area has likewise become home to 79 bird species as well as a destination site for migratory birds, while the jetty area of First Gas has become a nesting site for Olive Ridley turtles.

Philippine Native Trees 101-Generations-Rafflesia of the PhilippinesAlso in Batangas, First Gen assumes the role of direct project implementer of Project Center of Center, an integrated program to save the fragile marine ecosystem of the Verde Island Passage.

Located off the coastal waters of Batangas, Oriental Mindoro, Occidental Mindoro, Marinduque and Romblon, the Verde Island Passage hosts one of the highest concentrations of marine species among the world’s oceans. But the area is also threatened by problems that include poaching. As direct project implementer, First Gen extends logistical and operational assistance to Bantay Dagat volunteers in the towns of Mabini and Tingloy in Batangas.

As FRL expressed it in the foreword for “Rafflesia,” all these are “part of a larger, significant effort…to effectively manage the rich biodiversity in areas where we operate, making sure our presence serves to protect and enhance these resources.

“We believe that generating new knowledge and sharing it are paramount to a more meaningful, more effective approach to the monumental work of biodiversity conservation that our country faces,” he stressed.