‘Kapamilya’ celebrate 60 years of Philippine TVAt a party attended by the Philippine president and Manila’s elite, the guests watched themselves on several TV sets scattered around a sprawling garden in Sitio Alto, San Juan, just across the street from the transmitter site of Alto Broadcasting System (ABS). The venue was the home of Antonio Quirino, a judge-turned- businessman who co-owned ABS with James Lindenberg.

The few Filipinos who owned TV sets ogled the history- making affair from their living rooms, on rinky-dink affairs that were not much bigger than today’s iPads.

Lopez Group founder Eugenio “Eñing” Lopez Sr. entered the picture with his purchase of ABS in early 1957, along with several other assets, including the San Juan transmitter and the ABS studios on Florentino Torres St., Manila.

Less than six months later, he had the pieces of what would later become the Philippines’ leading broadcasting network. For in addition to his own fledgling radio- TV franchise called Chronicle Broadcasting Network or CBN and his new acquisition ABS, Don Eñing had also acquired two radio stations called Monserrat Broadcasting System, all of which found a home on a 44, 027-square meter lot on Bohol Avenue.

And that is how the kwento of the Lopez family and ABSCBN began. 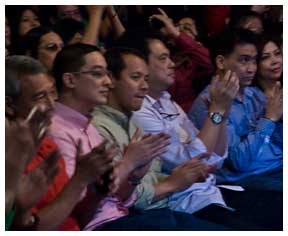 Stars in their own right, it was ABS-CBN employees’ turn to take front and center at the kickoff of the 60th anniversary of Philippine television on January 16, 2013.

“You are the stars of today’s shows,” said Korina Sanchez, who hosted the show with fellow “TV Patrol” anchor Noli de Castro. “We are starting a yearlong celebration with a thanksgiving for all your significant contributions to ABS-CBN.”

Eight employees from different departments and backgrounds took up the evening’s battle cry of “Kwento Natin Ito,” sharing their experiences and insights as Kapamilya.

“When we switched on the TV and TFC programs appeared on the screen, the Filipinos, who were scared and hopeless just moments ago, rejoiced,” Amparo recalled. “It really opened my eyes to ABSCBN’s mission of being in the service of the Filipino people.”

ABS-CBN Batangas’ Joan Panopio’s family was so poor that her father trained her to be a boxer, figuring it was a quick way to make a buck. But the feisty girl nurtured a dream of her own—she wanted to be the next Korina Sanchez. Panopio, who thought she did not have the looks and background to be an ABS-CBN talent, now anchors “TV Patrol Southern Tagalog.”

“It’s not about the money. ABS-CBN has definitely given me more than that,” she said.

Throughout the year, other employees will also share their stories. All of them represent the 60 years since Filipinos watched a party in San Juan— the maiden broadcast of ABS in 1953. Later, viewers, too, will have a chance to relate how their lives were touched by the Kapamilya network. 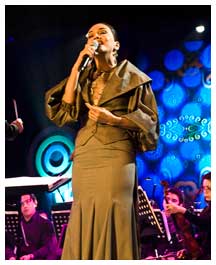 Kuh Ledesma sings A Million Thanks to You“The theme ‘Kwento Natin Ito’ is not about the story of ABS-CBN; it’s the story of all Filipinos,” ABS-CBN president and CEO Charo Santos-Concio said. “Philippine TV is a magical box that contains the colors of our collective experiences, emotions, dreams, imaginations and all things that make us human and make us Filipino.”

Santos-Concio added that it is an honor for ABS-CBN to have been the one to launch Philippine television, and for it to be recognized as the leading network for Filipinos wherever they may be in the world.

Chairman Eugenio “EL3” Lopez III harked back to the ironclad dictum of his father and grandfather, chairman emeritus Eugenio “Geny” Lopez Jr. (ELJ) and Don Eñing, when they took the reins of the former ABS.

“We are a Filipino organization. This is why we have been given the gift of being able to build one-on-one relationships with each of our Filipino brothers. This is our gift. This is our mission,” EL3 said. 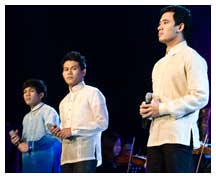 Jovit Baldivino and Marcelito Pomoy; Erik Santos;More than being a corporate name, the chairman stressed that ABS-CBN is “the living institution composed of you, me and every employee that has dedicated himself or herself to be in the service of the Filipino.”

“That’s what we have been doing for the past 60 years and that is what ABS-CBN will continue to do for all its existence,” EL3 said. (Read EL3’s full speech here.)

The three-part celebration to mark this milestone in Philippine TV is spearheaded by ABS-CBN’s Marketing Department, with Santos- Concio and channel head Cory Vidanes as program leaders.

Practically all ABS-CBN “hands” are on deck to ensure that efforts are synergized— and memorably so—across all the ABS-CBN platforms, said Corporate Marketing head Cookie Bartolome.

“We started planning this as early as May last year because we know this is a big milestone. Aside from the Kapamilya stories, we’ll be launching many exciting products and services all throughout the year that go beyond just broadcast or Channel 2,” Bartolome promised.Fr. Tito Caluag, an imam and a pastor deliver the invocation
ABS-CBN’s coverage of upcoming national events and celebrations will also hew to the “Kwento Natin Ito” theme,particularly the May 2013 elections and the traditional summer station ID. As part of the celebration of the 60th year of Philippine TV, ABS-CBN subsidiaries will also be marking their own milestones: the 20th year of TFC and Star Cinema, and the 25th for the Regional Network Group.

The celebration is seen to culminate in October with the 2013 Run for the Pasig River, which the organizers hope will break the record that it notched during the run’s 2010 edition, Bartolome said.