Lopez Holdings Corporation at 20: A parent to conglomerates 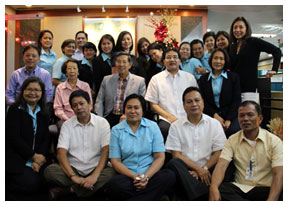 Chairman Amb. Manuel M. Lopez and president Salvador G. Tirona (seated, center) with Lopez Holdings officers and staff in November 2012Incorporated on June 8, 1993, Lopez Holdings Corporation was intended to be the conduit for investments in exciting new areas of a promising and newly deregulating Philippine economy.

Shares of the company were listed on the Philippine Stock Exchange on November 25, 1993, after a well-received initial public offering that raised P3 billion.

The vision of the late Eugenio Lopez Jr. (ELJ), then president and chief executive officer, made sense to domestic and international investors alike. If the country aspired to become an Asian tiger in the mold of Korea, Singapore and Malaysia, it had to sustain growth in production to keep pace with its rapidly growing Southeast Asian neighbors.

To do this, vital services were needed to support the big push forward: good, serviceable toll roads; reliable but affordable telecommunications services; efficient water and sewerage; clean and sustainable power; customer-focused commercial banking; and hassle-free inner city living for the expanding urban middle class. For each of these sectors, strategies were mapped out and corresponding investments were made. The company was to be a developer of concessions, intending to be a significant player in business promotion and development, and in the very lives of its investees’ customers. 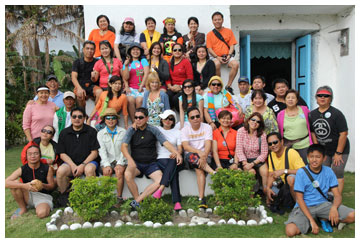 Lopez Holdings, then known as Benpres Holdings Corporation, issued long-term commercial papers worth P3B and Eurobonds worth $150 million. Investors were eager to participate in the potentially rapid development of Philippine infrastructure and utilities to support business and industry, as well as serve a growing population that was also expected to become wealthier over time.

The venture into toll roads through Manila North Tollways Corporation (MNTC) was a test of wills and patience. Close to seven years were spent securing government approvals and arranging for commercial credit facilities. The project was inaugurated by three Philippine Presidents beginning with Fidel V. Ramos, then Joseph Ejercito Estrada, and then again by Gloria Macapagal Arroyo.

Obtaining right of way for the expanded North Luzon Expressway took an enormous toll on resources, both in terms of time and financing. It took another two years of construction and road rehabilitation before the tollway became operational in 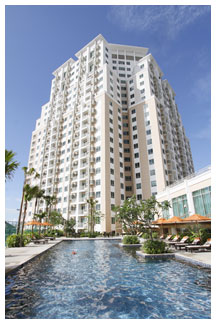 February 2005. Over a decade had passed since the holding company for infrastructure was established.

Lopez Holdings and partner Suez Lyonnaise des Eaux, later known as Ondeo, organized Maynilad Water Services Inc., which won the 1997 auction for the water and wastewater services of the western half of Metro Manila. The concession was plagued by an assortment of challenges from the beginning.

Due to the disparity in water rates bid by the winning concessionaires, Maynilad ended up with $800M in debt, equivalent to 90% of the dollar-denominated loans transferred by the Manila Waterworks and Sewerage System (MWSS). This meant a doubling of Maynilad’s debt in peso terms from P20B to P40B at the height of the effect of the Asian financial contagion. Having purely peso-income meant Maynilad’s revenues, no matter how efficient it tried to be, would not have been able to sustain concession loan payments for any extended period of time, unless tariff rates were adjusted to account for the catastrophic slide in the local currency’s value.

In 2001, after paying down $200M out of the original $800M in concession loans transferred from MWSS, Maynilad stopped payments and sought international arbitration in a bid to correct grave inequities in the implementation of the concession agreement. It had completed P4.3B worth of capital projects and connected over 200,000 new customers to the network, improving water service coverage to 86% from 63% at the start of operations.

However, regulatory challenges, in particular the lack of approval for fair tariff, meant foreign exchange losses would continue to eat into funds intended for service improvements.

In 2003, Maynilad filed for court-assisted financial rehabilitation. Lopez Holdings returned the water concession to the government in 2004, after a lengthy international arbitration process failed to resolve the issues for which Maynilad sought relief. A debt and capital restructuring agreement (DCRA) signed in 2005, and subsequently approved by the rehabilitation court, paved the way for the resolution of issues and the eventual reprivatization of Maynilad.

Under the DCRA, Lopez Holdings wrote off P3.7B for Maynilad and was released from its guarantees of Maynilad obligations.

Bayan Telecommunications Inc. became the maverick provider of fixed lines. It succeeded in carving a niche in leased lines and other corporate services, but for lack of a license was unable to participate in the highly lucrative mobile phone business. Similar to Maynilad’s experience with dollar-denominated debt, Bayan had to undergo court-assisted financial rehabilitation which was finalized in 2004.

Today, Bayan remains strong in the outsourcing and offshoring business segment, and is the industry model for superior customer service. Its highly committed workforce makes good on its money-back guarantees for services that do not meet committed response times, a practice that will drive other telcos bankrupt if they attempt to imitate it.

With all Bayan revenues practically being used to service debt, Lopez Holdings has provided for over P20B in investment losses in Bayan, held through Bayan Telecommunications Holdings Corporation.

The Lopez Group’s investment in PCIBank (Philippine Commercial and International Bank) predates Lopez Holdings. The bank was founded in 1960 during the boom times for Philippine banks, when every major entrepreneurial family was establishing its own. The late Eugenio H. Lopez Sr., who cofounded the Lopez Group with his brother in 1928, organized the bank together with Alfredo Montelibano Sr., Roberto Benedicto and several other investors.

The Lopezes mostly left the bank in the hands of professional managers who earned distinction for how well they ran the bank. It was consistently ranked among the top five banks in the country in the 1960s under Lopez Sr., Montelibano and Sixto Orosa Jr., and then from 1987 to 1999 under ELJ, John Gokongwei and Rafael Buenaventura. 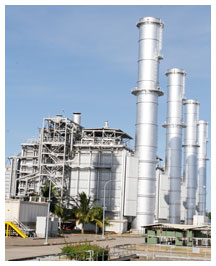 The interest in PCIBank was among the assets transferred by the Lopez family to the start-up Lopez Holdings. The company increased its stake in PCIBank in December 1998 from 17.8% to 30%, paying P130 per share. In May 1999, Lopez Holdings together with partner JG Summit Holdings Inc. jointly accepted the preemptive bid of P290 per share tendered for control of the bank. The bank passed on to the control of Equitable Bank, which was eventually bought by BDO Unibank Inc.

Lopez Holdings booked a gain of P3.975B from the sale of its PCIBank shares.

Property development Lopez Holdings was among the original proponents of Rockwell Land Corporation, holding a 24.5% stake in the premier developer. The Rockwell Land team proved to be innovative and dependable, finishing its first batch of residential condominium projects on time and to the satisfaction of buyers.

After the initial equity contribution of Lopez Holdings in 1995, Rockwell Land operated as a self-sufficient company, relying solely on its cash flow and ability to secure loans against its assets. Successful preselling allowed Rockwell Land to stay ahead of the financial contagion that gripped Southeast Asia in 1997. It delivered Rizal Tower and Hidalgo Place to buyers in 1999, and Luna Gardens and Amorsolo Square in 2000 just as the Power Plant Mall opened for business.

The sterling reputation of Rockwell Land as a reliable developer and customer-focused property manager augured well for subsequent projects such as The Manansala (delivered in 2005), Joya Lofts and Towers (delivered in 2008) and One Rockwell (delivered in 2010). Its ventures outside Rockwell Center in Makati, such as The Grove, a residential community in Pasig, and the Rockwell Business Center, an office building complex also in Pasig, have met target sales and recurring revenues on account of the welcome reception by target markets.

Lopez Holdings sold its stake in Rockwell to FPH in 2009 at a loss of P156M. It was not a total loss, however, as Lopez Holdings received over P400M in dividends from Rockwell from 2007 to 2009.

In the early to mid-1990s, the value of FPH was derived solely from its investment in Meralco, the country’s largest power utility. Over time, it would invest in power generation facilities and rebalance its portfolio so that today, over 80% of its value is derived from power generation.

FPH has paid steady dividends over the years, even during periods of expansion for its subsidiaries. Its objective for its rebalanced portfolio is to continually increase recurring income from investees. 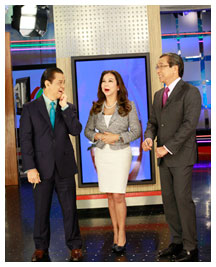 Noli De Castro, Korina Sanchez & Ted FailonBy far, the most profitable investment of Lopez Holdings has been in ABS-CBN, which has historically been generous to shareholders. Whenever able, ABS-CBN has declared up to half of the previous year’s income as dividends. What it lacks in hard assets, it makes up for in plenty of intangibles, including influence and goodwill.

Its news and current affairs programs are among the most respected in the country, building up the credibility of its anchors to levels that get them elected to public office. Its entertainment programs and films present world-class production values that capture viewers as well as international awards for its artists, writers, directors and producers. Its corporate social responsibility programs under ABS-CBN Foundation Inc. are among the most trusted Philippine advocacies globally. ABSCBN Global and international sales distribution continually work to present the best of the Philippines abroad, earning loyal viewership from both Filipino communities and other nationals through dubbed or subtitled programming options.

Sky Cable Corporation, now a subsidiary of ABS-CBN, also suffered from the Asian financial crisis as the cost of foreign programming, the staple of cable television, doubled while subscription fees would not keep pace. After restructuring P2.5B worth of debt through consensual negotiations with creditors in 2004, SKY began its slow but sure return to profitability by further rationalizing operations and investing in service innovations such as broadband and prepaid Internet (2006), high definition and pay-per-view specials (2008) and video-on-demand (2010).

With Lopez Holdings unable to support continuing investments in the SKY network, ABS-CBN stepped up with new investments in SKY beginning 2005. SKY was positioned as a carrier in its digital convergence strategy.

As a parent to conglomerates, Lopez Holdings remains committed to investments that uplift the lives of Filipinos. Its major investees ABS-CBN and FPH are real conglomerates with investments in industries that drive nation building. Through them, the vision that led to the founding of Lopez Holdings—that of progress for the country and world-class services for Filipinos— is coming to fruition.

“We now have a clean balance sheet. We are financially stable with our two core businesses. We have now been providing value and giving returns to our stakeholders,” says Salvador G.

The company paid out cash dividends of P0.10 per share in 2011, the first time in its history. It was able to maintain the same rate in 2012, supported by dividends received from ABS-CBN and FPH.

Going forward, Lopez Holdings will support new investments being made at the ABS-CBN and FPH levels. In the success of these two great assets lies the wherewithal for future endeavors. (Story by: Carla Paras-Sison) 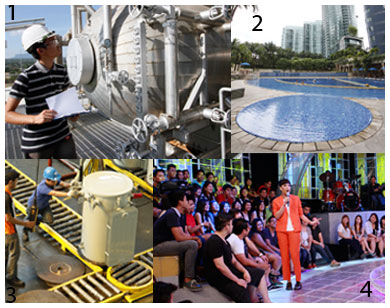 Clockwise from top left: Sta. Rita power plant in Batangas; Rockwell Center is a model inner-city development that raised the bar of excellence and created ripples of change in the real estate industry; Investing in service innovations enabled Sky Cable to return to profitability; Host Vice Ganda of “GGV” entertains viewers every Sunday on Channel 2