The OML Center: Front and center in addressing climate risks

The onslaught of killer storms in recent years seems to bear this out. The top five most destructive typhoons in the country occurred within a span of only five years, from 2008 to 2012. In total, Pablo, Pepeng, Pedring, Frank and Ondoy extracted more than P100 billion in damages to infrastructure, agriculture and private properties. While not part of the top 10, another disturbance, Milenyo, is particularly memorable to those living in the capital as it was the “strongest typhoon to directly impact Metro Manila in 11 years” in 2006. 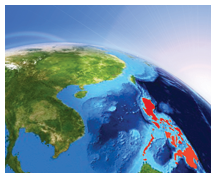 Meanwhile, five of the top 10 most deadly typhoons struck within nine years in the 2000s, including 2012’s Pablo. Each one claimed upwards of 1,000 lives. Just this August, Maring exerted its full fury, the torrential rains and floods leaving most of Metro Manila and nearby provinces under water for several days. Maring has already displaced Ondoy in terms of total amount of rainfall dropped, according to the Philippine Atmospheric, Geophysical and Astronomical Services Administration (Pagasa). Labuyo, which preceded Maring by about a week, is this year’s strongest typhoon so far. In fact, it has been removed by the state weather bureau from the list of tropical cyclone names; this is done for disturbances that cause more than P1 billion in damage.

“The Philippines is in the top 3, top 5 most climatically risky countries in the world,” says Dr. Rodel Lasco, scientific director of the OML Center for Climate Change Adaptation and Disaster Risk Management Foundation Inc. “We have 20 typhoons on the average every year, probably the highest in the world, not to mention we’re hit by climate change-related disasters such as flooding and landslides. We also have other disasters, like earthquakes and volcano eruptions.” And things are only bound to get worse.

Tribute to the chairman emeritus 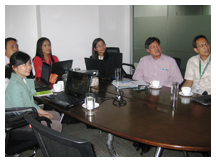 Dr. Ujjwal Pradhan (2nd from right), regional director for Southeast Asia of the World Agroforestry Centre, discusses strengthening partnerships with the OML Center during his July 2013 visit.In August 2012, First Philippine Holdings Corporation (FPH) signed a memorandum of understanding with Ateneo de Manila University, De La Salle University and the University of the Philippines (UP) and provided the seed fund of P150 million to start up what would become the OML Center.

A tribute to Lopez Group chairman emeritus Oscar M. Lopez (OML) as well as a “gearing up” to address a very real threat, the center aims to be front and center in terms of generating “scientific information that will lead to innovative solutions.”

“We want to help make our citizens more resilient to a changing climate as well as to disasters,” Lasco states in an interview at the center’s 36th floor office in Ortigas.

Leading knowledge center
The Lopez Value of nationalism, he adds, is manifested in the center’s stated mission: to be a leading knowledge center in climate science and disaster risk management. But beyond adaptability, what he hopes for is a people able to thrive in a world beset by extreme weather events. “You don’t have to remain static—just because you’re poor, you’ll always be poor. We believe we can even prosper as a society amidst natural disasters,” Lasco explains.

Working alongside Lasco at the OML Center is a select team composed of honors graduates and science high school alumni.

“We tried to recruit the best staff,” the scientific director says of program manager Perlyn Pulhin, researchers Rafaela Jane Delfino and Luigi Toda, and HR/Finance/ administrative assistant Alyssa Patricia Manzano. “Any one of them could be a faculty at UP or any of the top universities.

The task ahead for Lasco and his team is clear-cut: to develop innovative, evidence-based solutions to address climate risks and disasters.

However, to maximize the synergy between the two, risk mitigation (or reduction) and adaptation are now seen as “key factors in achieving climatechange resilient communities.” “When it comes to practice, risk reduction is commonly associated with disasters, which are more immediate and ongoing; while adaptation is more associated with climate change, which is more gradual and longer. Initially, climate change adaptation and disaster risk reduction were dealt with separately. However, countries have realized its effective synergy and started merging the two together,” the brief reports.”

Main challenge
“Our main challenge is to come up with or to develop and implement researches that will enhance the resilience of Philippine society to climate risks and disasters. It’s a big challenge because we are buffeted by typhoons every year, all sorts of disasters,” Lasco notes. In addition to implementing its own researches, the OML Center also hands out grants to researchers, universities and other research institutions. To this end, the center has already chalked up a couple of major initiatives after only a year of operations.

“Awarding the first grants to Ateneo, La Salle and UP is one of our main accomplishments so far,” Lasco says of the May 2013 event where the country’s top three universities received a total of P13 million for seven project proposals.

The newest Lopez Group foundation has already sent out a call for the second round of grants, which it has calendared to be awarded in 2014. It is targeting to allocate about P8M worth of grants to at least five project proposals.

“We are also in the process of developing our own in-house research. For example, we’re downscaling climate scenarios, what may happen in the Philippines in say, 50 years,” Lasco says.

Aside from these, the center will dedicate itself to formally commending Filipino scientists’ outstanding achievements; fostering capacity building, communication, best practice and exchange of ideas; and enabling solution deployment and national/ local government liaison.

“In five to 10 years I see the OML Center as an important player in the science community that will drive climate science in the country, and hopefully with stronger links internationally as well,” Lasco states.