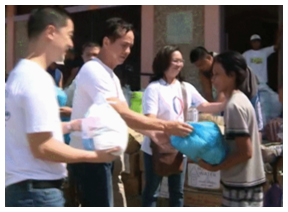 ABS-CBN chairman Gabby Lopez (2nd from left) is joined by channel head Cory Vidanes (3rd from left) and ABS-C President Carlo Katigbak in Hernani, Eastern Samar“Hindi namin kayo pababayaan” — this was the promise of Energy Development Corporation (EDC) president Ricky Tantoco to employees and kapamilya after super typhoon The battle cry reverberated throughout the companies of the Lopez Group. From the Benpres Building headquarters in Ortigas to Quezon City to Antipolo to Makati to Parañaque and other areas, employees dipped into their pockets, knocked on the doors of friends and family, bought urgently needed supplies for relief packs, and dug into their pockets again.

Only hours earlier, ABSCBN News’ Atom Araullo and Ted Failon were at ground zero in Leyte. For braving the wrath of Yolanda and delivering some of the earliest reportage on the damage to the island, the veteran Kapamilya reporters reaped a surge of admiring words from Pinoys and even from foreign viewers.


Lopez Group nerve center
In Benpres Building, the nerve center of the Lopez Group, a massive collection drive had been set in motion. 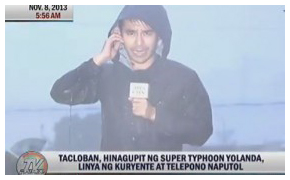 Both groups put together hygiene and food kits for employees based in Leyte, Samar, Negros, Iloilo, Capiz and other affected areas. At the same time, the council hastened to prepare a comprehensive database of all the employees affected. 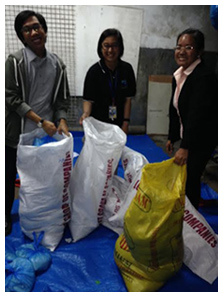 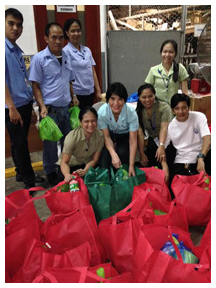 Southbend employees prepare to turn over their packed goodsAfter being repacked by volunteers from First Philippine Realty Corporation, FPIC, Knowledge Channel Foundation Inc. and Lopez Museum and Library, the packs were given to the companies’ HR departments for immediate distribution.

“We are touched by this gesture, as I am sure also our affected employees who will receive not just the goods but also the reminder that they are in the hearts and thoughts of their kapamilya in this time of need,” wrote Bayan employer brand consultant Dimpy Jazmines in another thank-you note.

Not to be outdone by their elders, the Orchestra of the Filipino Youth dedicated a whole day to fundraising performances at the lobby of the Benpres Building. The young musicians contributed their day’s earnings from “Payday Playday Forward” to the LGFI for the Lopez Group employees’ calamity fund.

“This has always been the Lopez Way—we unite and help each other in times of adversity,” said Lopez Holdings VP Pinky Diokno. 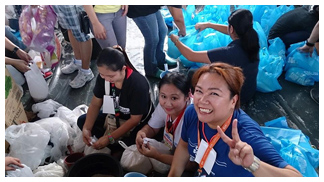 SKYcable set up free viewing stations in various evacuation centers to serve typhoon survivors desperate for news and updates about their family members, as well as needing temporary diversion from the devastation around them. 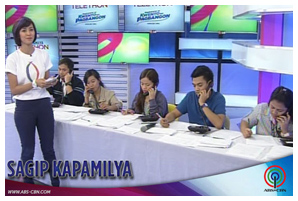 Bianca Gonzalez puts in time at the ABS-CBN telethon

Sagip Kapamilya was the first in some areas to distribute relief goods to victims in the affected areas. About 128,777 families in Leyte, Samar and Cebu have received a total of 579 tons of relief goods. Cash donations to Sagip Kapamilya, from individual and corporate donors as well as nongovernment organizations and other groups, meanwhile, totaled P416,334,322 (as of December 2).

Back in Quezon City, the Kapamilya network and its subsidiaries had organized a series of fundraising events, including a telethon with celebrities and volunteers manning telephone lines, and a benefit concert dubbed “Tulong Na, Tabang Na, Tayo Na.”

“Tulong Na” T-shirts were also sold, the proceeds from which were added to the Sagip Kapamilya calamity fund. The shirts are worn by Pinoys from all walks of life as a gesture of solidarity with the victims. Rockwell Land also rallied to help the victims. 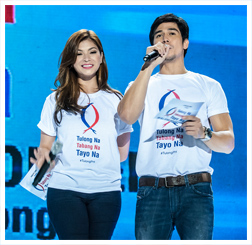 In the Lopez hometown
Iloilo, the hometown of the Lopez family, was not spared, particularly the northern part of the province. Cedie Lopez Vargas, Rina Lopez Bautista, Bea Puno, Pia Abello and Angela Lopez, with Lopez grandchildren Erika Abello and Martin Vargas, plus their cousins and Lopez Inc. staff, made the 3-1/2 hour drive to Estancia, Iloilo where 10,000 families were affected.

Arriving in Estancia at past noon, there was a long line of people who had been waiting for hours for their arrival. Estancia is the same site where the oil spill from a barge took place and is still affecting the residents. 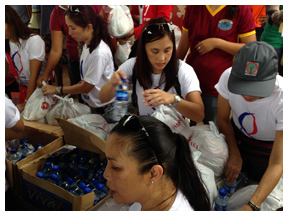 Sisters Rina Lopez Bautista (foreground), Bea Puno, Angela Lopez, Pia Abello and Cedie Lopez Vargas come to the Ilonggos’ aid in EstanciaThank you and moving forward
The initial stage of providing relief to victims may have ended. Now comes the crucial rehabilitation stage. At the nerve center, efforts are under way to help employees whose homes were damaged. The Lopez Group, through LGFI, is now looking at how to provide assistance to these employees as they move on to rebuild their homes.

Over in EDC, “the smiles on the faces of our EDC employees and other Leyteños are coming back…,” Tantoco, who also chairs EDC’s crisis management committee, wrote in a recent email update.

“Albeit ragged and still mud-stained, we are already standing, unbent. We will continue to rebuild lives, communities and our business in the weeks and months ahead," he said. (Story by Dulce Festin-Baybay)