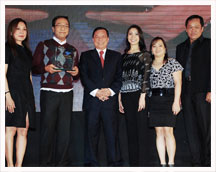 Rich Quill harvest for Lopez GroupIT was a rich harvest for the Lopez Group at the 10th Philippine Quill Awards with six Excellence awards and eight Merit awards, plus the top award in the Communication Management division copped by ABS-CBN Corporation for “DZMM Kapamilya, Shower Na!” The Philippine Quill Awards handed out by the International Association of Business Communicators-Philippine chapter is an annual recognition of the exemplars of communication management, communication skills and communication creatives in the last year. “DZMM Kapamilya, Shower Na!” was among 12 Excellence awardees in its division that competed for the top prize. Among the contenders were “Boto Mo, I-Patrol Mo: Ako ang Simula,” another Excellence awardee for ABS-CBN.
The other four Excellence awards of the Lopez Group were in the Communication Skills division courtesy of First Gen Corporation for its 2009 annual report (“More with Less”) and of Energy Development Corporation for its 2009 annual and sustainability report (“Sustain via Renew”), its services video and its corporate video.