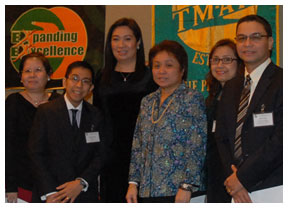 Oxales leads TMAP Atty. Leny Oxales (3rd from left) of First Philippine Holdings Corporation (FPHC) was inducted as president of the Tax Management Association of the Philippines (TMAP) for 2011. Atty. Oxales is an assistant vice president of FPHC and has been with the company for 15 years. She earned her bachelor of arts and her bachelor of laws degrees from UP Diliman and took up taxation and international law at the Harvard Law School. She finished the academic requirements of the Executive MBA at the Asian Institute of Management. She loves to play golf with her lawyer-husband and two children. Photo shows the 2011 officers and directors of TMAP with inducting officer Internal Revenue Commissioner Kim Jacinto- Henares (4th from left) at the TMAP inaugural ceremony at the Mandarin Oriental Hotel, Makati City, on January 31, 2011. 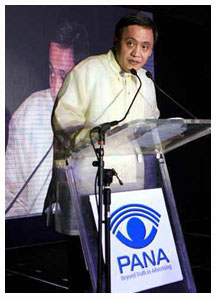 Bayan’s Rojo: elected president of PANA Bayan’s Rojo: elected president of PANA
Bayan VP for Corporate Brand and Communications John Rojo took the helm of the Philippine Association of National Advertisers as president. To kick off his term, Rojo took charge of the Narito Ako Pilipino campaign that encourages nationalism through a collaboration of local musicians for a song to capture the Filipino spirit. Rojo also serves as VP of the Public Relations Society of the Philippines, which accorded him the title of Accredited Public Relations Practitioner or APR. Rojo, who joined Bayan in 2002, spearheaded the digital component of the Lola Techie campaign and the reimagining of the new brand of Bayan Telecommunications anchored on a new brand essence and brand identity in 2007. A holder of an AB Journalism degree from the University of Santo Tomas, Rojo is married, with two daughters.