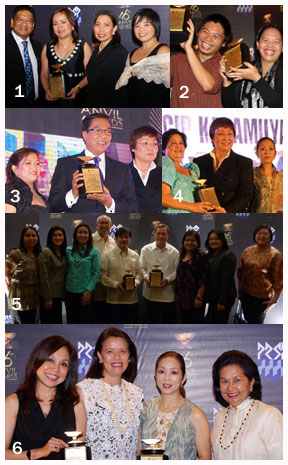 The Anvil, considered the Oscars in the local public relations (PR) profession, is awarded by a distinguished multi-sectoral jury to outstanding communication programs and tools designed and implemented in the past year.
ABS-CBN bagged five awards, including the Bronze Anvil for its Guinness World Record-breaking fun run 10.10.10: Run for the Pasig River.
ABS-CBN won Awards of Excellence for Boto Mo, iPatrol Mo, DZMM Kapamilya, Shower Na, Sagip Kapamilya and again, 10.10.10: Run for the Pasig River which are public service-skewed campaigns that encouraged Filipinos to be proactive members of the society in relation to their environment, country and fellowmen.

ABS-CBN Foundation’s 10.10.10: Run for the Pasig River showed the world how Filipinos ran united toward a good cause, which is to help rehabilitate the historic Pasig River. The large-scale project also generated large-scale results as more funds for the Pasig River-rehabilitation project Kapit Bisig Para sa Ilog Pasig were earned and more importantly, the public became further aware and even involved in the Pasig River cause.
EDC received an Anvil Award of Excellence for the Master of Green Power communication program and an Anvil Award of Merit for “Sustain via Renew,” an integrated annual and sustainability report. The Master of Green Power communication program was cited for communicating its creative portfolio of services, sustainability report, and participating in the 2010 World Geothermal Congress. Sustain via Renew won for integrating its business performance milestones with its sustainability efforts.

Eugenio Lopez Foundation copped an Anvil Award of Excellence under the PR tools category for “Unfolding,” a commemorative book on the 50-year history of the Lopez Museum and Library.
The Lopez Group of companies received an Anvil Award of Merit under the PR programs category for “Undaunted: The Musicale,” a musical play about the life of Lopez Group chairman emeritus Oscar M. Lopez and the history of the Lopez family and group of companies that was performed for internal audiences and key external stakeholders.
*Photo Caption*