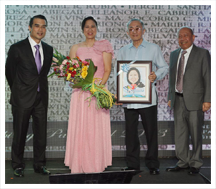 Abegail Cabrera and Mercedita Rosaldo of the Finance and Treasury Department, and Ria Silvino of the Legal Department were awarded for their 20 fruitful years of service. Cory Miguel, the ever-reliable secretary of FPH president Elpidio L. Ibañez, was awarded for serving the company for 30 years. This year’s Gabi ng Parangal also acknowledged Miguel’s retirement as a regular employee.

Lastly, two of the kindest employees of FPH, Nicolas Cruz of the Human Resources Group, retired after more than 30 years of service, while the Comptrollership Group’s senior vice president Pearl Catahan brought tears to the employees’ eyes as she delivered her parting speech.

The Orchestra of the Filipino Youth performed for the employees. Closing the event with a blast were three of the FPH Music Icons: Marjorie Salanga of IBSI, Rene Espinosa of First Philec Solar Corporation and Chelou Monzales of Rockwell. The event was hosted by the Legal Group’s Atty. Lianne Bacorro and Atty. Esmer Amistad. (Story by: Ayesha Marie Volpane)