Dealing with climate change will need ‘heart, nerve and sinew’

Excerpted from the keynote remarks by First Philippine Holdings Corporation chair Federico R. Lopez on the 3rd Annual Summit of the Shareholders’ Association of the Philippines held in Makati City on June 17, 2016 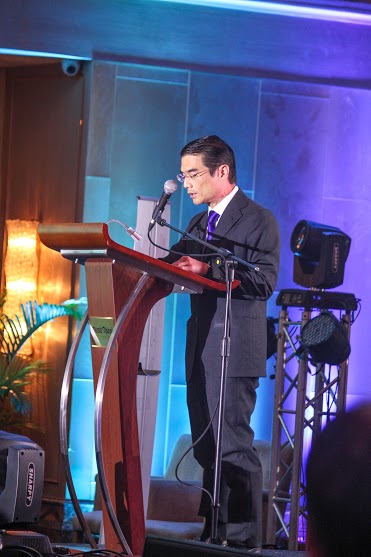 “If you leave P&G’s money, its buildings, its brands, but take away its people, the business will be in real jeopardy. But if you take away the money, the buildings, the brands, but leave the people, it will build a comparable business in as little as a decade.”

I understand precisely what he’s saying as I’ve seen it happen many times in our history as a corporation and as a family. It isn’t people per se that allow this to happen but it’s when they’re galvanized by both purpose and values that the combination becomes extraordinary.

My Lolo (Eugenio Lopez Sr.) had to rebuild from the ashes several times in his life: in August 1928, when a powerful typhoon destroyed 60% of his sugarcane crop and almost wiped him out financially. Then again in 1941, during World War II when all the aircraft of his pioneering airline INAEC were bombed by the Japanese, and all the buses of his Panay Autobus were commandeered by the United States Armed Forces in the Far East (USAFFE) for use in the war. However, each time he rebuilt, he would always accept his circumstances with great composure and proceed to reconstruct with not a trace of bitterness or rancor. In fact, he would do so only with the same infectious zeal and enthusiasm like he was at it for the first time.

He lost everything yet again in 1972, to the Marcos dictatorship when ABS-CBN, The Manila Chronicle, PCIBank, Meralco and Meralco Securities Corp. (the precursor of FPH) were handed over to cronies of the dictator.

When the family returned to FPHC after Marcos fled the country in 1986, my dad returned to a company that was adrift, practically bankrupt and in danger of keeling over. Yet he acted with the same equanimity and resilience displayed by his own father at various times in his life decades earlier. It’s like that phrase in Rudyard Kipling’s timeless poem “If,” that I’m sure inspired many of us in this room as we were growing up which says, “if you can watch the things you gave your life to broken, and stoop to build them up with worn out tools.” Seeing the elders before me fight for certain principles, soldier on and rebuild even as they saw the things they gave their lives to, broken is an image that cannot easily be erased in my own mind.

It’s uncanny how although the cast of characters involved in our businesses have changed through many generations, there’s a constancy of purpose and a consistency in the values guiding our decisions like a genetic code. Roy Disney, a nephew of founder Walt Disney, likes to say, “It’s not hard to make decisions when you know what your values are.” For many of us in the Lopez Group, it determines the people we attract and whom we ultimately work with. Purpose and values energize our lives in many respects, and more importantly they guide our decisions through tough times and difficult junctures, showing us where our true north lies.

Why have our values been consistent over time? They were not deliberately taught but for me it was through the power of stories. As far back as I can remember, we always grew up enthralled by stories about our elders. What they did, what they stood for, and the kind of persons they were. But my dad, with a keen sense of history, consciously deepened our knowledge of the family’s past when he commissioned the late Raul Rodrigo to meticulously research and interview many keepers of these stories inside the family and out before they passed. Raul’s 14 years of research resulted in countless insights into how the family weaved in and out of our country’s history. This resulted in a series of nine books on the Lopez family and our various companies.

Yet another way my dad deepened our sense of shared purpose and ideals was to lead the Lopez Group seven years ago through the exercise of identifying the key values that we treasured most. This wasn’t a mere wordsmithing exercise but one that involved looking back, introspection, deliberation and lots of thought about the values that brought us here and whether any of them had a place in our future. That’s how we identified the seven Lopez Values, namely: Pioneering Entrepreneurial Spirit, Business Excellence, Unity, Nationalism, Social Justice, Integrity, Employee Welfare and Wellness. Yet among these seven, one stuck out like a sore thumb. Many, including the professionals, were wondering whether a business group should be including Social Justice as one of its core values. Was there an irreconcilable conflict between having a tough fighting social conscience and the goal of profits in a developing country like the Philippines? After much deliberation and introspection, we recognized that Social Justice in the broadest sense, that of doing right for society and the world around you, has always been at the core of our Group’s DNA. It carried enormous risks, as when we lost everything during the Marcos martial law years, but one fact is clear: we would never sacrifice those principles at the altar of profits or political expediency.

Social Justice also emerges in the way we approach our geothermal business. You can manage it in an extractive way where you just mine the use of the concession’s steam resource and then walk away when the usable steam and heat are depleted; or you can nurture it as a renewable resource which lives sustainably, with its reservoirs continuously recharged through a forest that’s cared for and healthy. We’ve taken the latter approach and constantly reforest within our 250,000 hectares of concession areas. We’ve gone a step further, however, by carefully studying the biodiversity around our plants and reforesting with endemic tree species that strengthen the surrounding ecosystems.

Another instance where Social Justice was put to the test was during typhoon Yolanda.

Our experience being in the eye of the storm and seeing its effects on lives and the community left its deep imprint on everyone in EDC. When many ask us why we did what we did, I just have one answer: it was but human to do so. It’s been three years since Yolanda and the experience continues to guide how we move forward as a business group.

This is why just a few weeks ago we made public our group’s stance that we would no longer consider building, developing or investing in coal fired power plants despite the fact that every other business group and bank in the country is doing so, like there’s some kind of gold rush. We’re making it our mission to help the country navigate the challenging transition toward a cleaner decarbonized future. I have no doubt it can be done. The feasibility to do this is already here, it’s simply our mind-sets and our conversations that need to change.

If there’s any single issue in the world today that embodies all our seven values, it is the threat of climate change, adapting to it and changing how we power our lives and economies fast enough so we don’t leave a dangerous and catastrophic planet to our children and grandchildren. Dealing with it correctly as well as profitably will require every “heart, nerve and sinew” in the organization coming together to overcome something that today seems inescapable. But our values tell us that many harsh realities throughout history also seemed so—like slavery, apartheid, even the divine right of kings— but like all these, anything brought about by humans can also be changed by humans. It just needs a dash of moral courage. As Robert F. Kennedy liked to say:

“Few men are willing to brave the disapproval of their fellows, the censure of their colleagues, the wrath of their society. Moral courage is a rarer commodity than bravery in battle or great intelligence. Yet it is the one essential, vital quality for those who seek to change a world which yields most painfully to change.”

Although our lives have improved tremendously because of disruptive technology, it’s made a living hell for many running big corporations today who now must have the ability to see through walls, and around corners just to understand the forces at work that can sink them.

With such massive disruption, how will those at the helm of our companies continue “uplifting lives” as previous generations have done? That question keeps me up at nights, anxious at times, but more often than not it’s because I’m excited and brimming with ideas. Because it’s precisely at challenging junctures like these where opportunities are created and won. To survive and even capture these opportunities in today’s fast-paced environment, we will need to build a living company that never stops learning, is boundlessly curious, and has a culture that empowers the best and the brightest talent to work creatively and innovatively in fulfilling our mission well into the future. When your culture is strong and well defined, the organization will naturally attract and promote the best people who are aligned with those values. That’s when such values acquire a life of their own and become self-perpetuating for generations to come. And when leadership is no longer limited to the family’s narrow gene pool, it paves the way toward a truly world-class, professionalized company capable of competing in today’s exponentially disruptive environment.