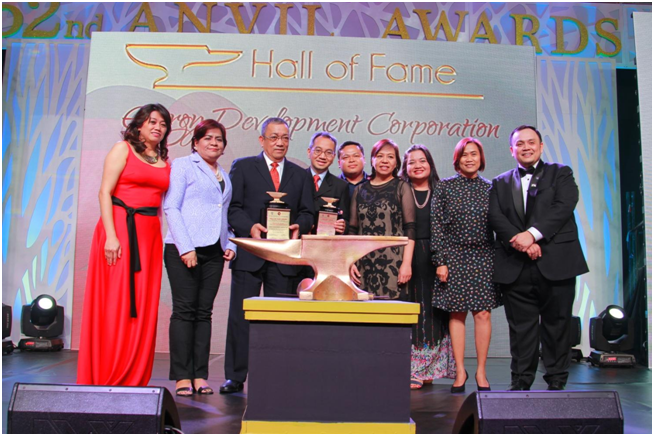 Energy Development Corporation (EDC) has been elevated to the Anvil Awards’ Hall of Fame after winning five Gold Awards for its outstanding annual performance reports.

The first two reports narrated EDC’s transition from being a government-owned and -controlled corporation to being a publicly-listed and fullyprivatized firm after its acquisition by the Lopez Group.

For the 2010 annual report, EDC integrated the company’s annual and sustainability performance following the Global Reporting Initiative’s (GRI) sustainability reporting framework. It was the first Philippine report to be certified as fully compliant with the GRI framework.

In 2013, “It’s Possible” was rated A+ by the GRI for the company’s disclosure on all relevant key performance indicators using the Electric Utilities Sector Supplement for sustainability reporters.

EDC’s fifth Gold Anvil Award, for its 2014 performance report “Execute and Deliver,” reported not only on the company’s record high recurring net income of P9.3 billion but also on its environmental, social and governance performance.

“We recognize that integrated annual and sustainability reporting is an emerging global trend that allows us to give our stakeholders a holistic view of our performance. Using the GRI framework paved the way for us to tell our sustainability story in a systematic manner that reflects how we continuously manage the resources that we measure each year,” EDC president and COO Richard Tantoco said.

The performance reports also narrate the annual progress of EDC’s Binhi greening legacy and its CSR program HELEn (Health, Education, Livelihood and Environment). The Binhi Tree for the Future project also bagged a Gold Anvil in this year’s Anvil Awards under the Specialized PR Program category.

Organized by the Public Relations Society of the Philippines, the Anvil Awards is considered the Oscars of PR in the country.(Story/Photo by: Toni Nieva)