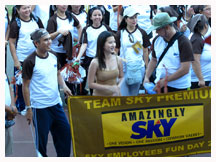 SkycableSKYCABLE held its Employees’ Fun Day at Marikina Sports Complex on May 15, 2010.

The day kicked off with a fun run, followed by the parade of colors with all 10 teams and the lighting of the torch by the team captains with Arnold Saez, who won the previous Bayan fun run. SkyCable chief operating officer Carlo Katigbak officially opened the event. The muse for the day came from Sky Platinum, Paula Arevalo. Everyone got even more excited when the runners hit the track, with CLK himself as one of the players.

There was a 4x50 meter relay for women, men’s and mixed 4x100 meter relays, obstacle course, tug of war, caterpillar race, CAROT + I game, and back-to-back relay. Head of operations Raffy Aguado stressed how SkyCable’s core values—specifically teamwork, ownership and results orientation—were evident in the games. He added that even though there were different teams and different groups in the organization, the employees should be one in achieving SkyCable’s vision and mission.