Run For KnowledgeKaRUNungan 2010 aims to help generate awareness and support for the continued resource and learning gaps in the education system. While there have been many improvements in the system over the years, majority of elementary and high school students are still unable to attain adequate mastery of their lessons and are therefore unable to finish their schooling.

Through a series of running events, KCFI enjoins the growing Filipino running community to champion the cause of education, and give millions of students their “second wind” in order for them to reach the finish line. Hence KaRUNungan 2010’s theme, “Every Learner, A Finisher.”

42-for-42 Donations
By dedicating their run for education, NYC 2010 Runners will be able to help provide the Gift of Knowledge to thousands of poor and marginalized public school students across the country. They simply have to ask friends and supporters to donate $1 for every kilometer they reach as they attempt to finish all 42 kilometers.

The total amount that a runner generates will be contributed to the KaRUNungan 2010 Fund that will help produce much-needed instructional shows in English, Science and Math with virtual Expert Teachers on Air. Sponsorships for other Knowledge Channel Packages such as cable-a-school are also encouraged.

There are three ways to get involved in the KaRUNungan 2010 NYC Marathon:

1.    If you are an ING New York City Marathon 2010 participant, join the Runners for Knowledge in New York by registering and filling out the form at www.karunungan2010.com

2.    If you are not an ING New York City Marathon participant but would like to support a particular Runner for Knowledge in New York, you may pledge $1 (or its equivalent) for every kilometer your chosen runner will complete. The KaRUNungan website has the list of runners who have dedicated their run for knowledge. Family, friends and supporters can simply click on the name and fill up the sponsor’s details to make the pledge.

3.    If you are not running or don’t have a Runner for Knowledge to support – but still would like to contribute to the cause of education – you may donate to Knowledge Channel through www.karunungan2010.com or BPI Account no. 3430071172.

Founded in 1999, KCFI delivers quality educational content to some 3 million children in around 2,000 public elementary and high schools using television and emerging media technologies. It broadcasts 14-hours of educational shows based on the government-prescribed curriculum as well as values-based and life skills programs. It has proven to be an effective intervention in improving student performance and attendance among beneficiary schools that regularly use the Channel. 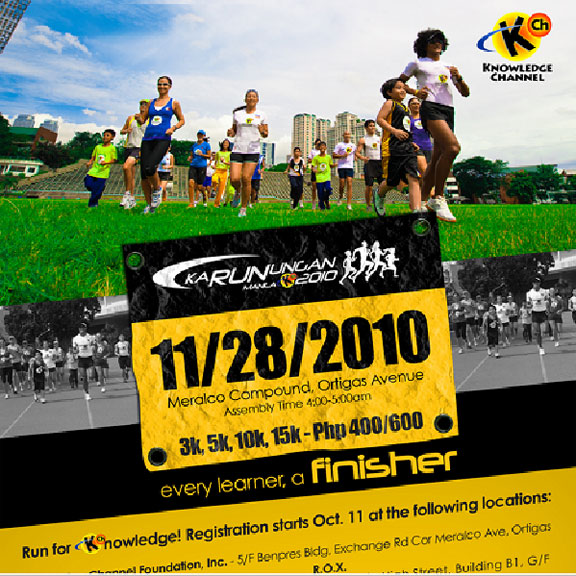