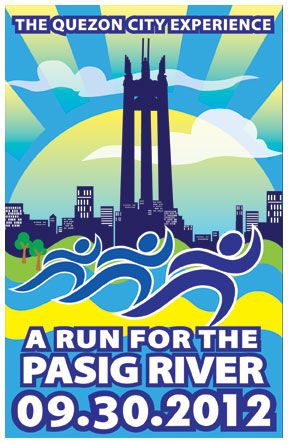 The major event categories are the 15K Ride and Roll with 4 a.m. gun start, the 15K Commonwealth Challenge Run with 4:10 a.m. gun start and the 5K Morning Madness Run with 6 a.m. gun start. There will be one starting line at the Quezon City Memorial Circle (QCMC), going straight to Commonwealth Avenue then back to the QCMC for the finish.

KBPIP has organized three runs for the Pasig River. The 2009 Philippine International Marathon: A Run for the Pasig River, which had about 23,000 participants, helped fund the initial phase of the rehabilitation of Estero de Paco in Manila.

The 10.10.10 Run for the Pasig River broke the Guinness World Record for the most participants in a racing event with 116,087 runners. It helped fund the second phase of the Estero de Paco cleanup.

The 11.20.2011 Run for the Pasig River was the country’s largest footrace last year with 86,547 runners. The funds from that run are being used to rehabilitate Estero de San Miguel and four other esteros behind Malacañang.