Thousands Run, Ride and Roll for the Pasig River

Around 87,000 registered to participate in the advocacy event that will raise funds for the cleanup of esteros in Quezon City. This number was higher than the turnout in 11.20.2011 Run for the Pasig River that was the largest single racing event last year with 86,547 runners. 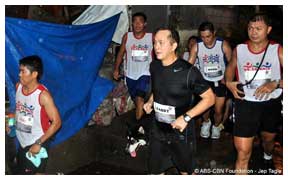 ABS-CBN Chairman and CEO Eugenio 'Gabby' Lopez III by Jep Tagle“There were still a lot of people despite the rain. They ran in the rain, they biked in the rain. It shows conviction. If people want it bad enough, we’re going to clean the Pasig River,” said Gina Lopez, managing director of ABS-CBN Foundation Inc. that operates KBPIP. 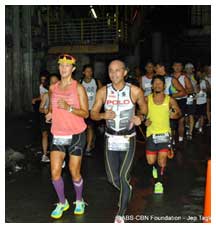 KBPIP aims to raise P14 million in the run to start the cleanup in the esteros of Quezon City as a part of the seven-year rehabilitation of the Pasig River. KBPIP’s campaign, which has spurred local government units in cleaning their own esteros, will be launched in San Juan City in 2013.