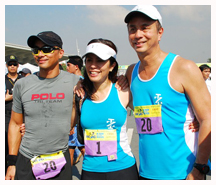 MUSTERING the support of about 22,000 runners and raising some P5 million, the Philippine International Marathon 2009: Run for the Pasig River at the Quirino Grandstand on Nov. 8, 2009 was undoubtedly a runaway success. A visibly elated Gina Lopez, managing director of ABS-CBN Foundation Inc. (AFI), led the roster of bigwigs who welcomed the throng and reiterated the message of the run: to clean the Pasig River. “We want the runners to see it…. Basta tulong-tulong tayo, malilinis ang Pasig,” Lopez said. Also on hand to offer words of encouragement were Lopez Group chairman Oscar M. Lopez (OML), former First Lady Ming Ramos and former President Fidel Ramos, Manila Mayor Alfredo Lim and Commission on Higher Education (CHED) chairman Emmanuel Angeles.

Runners from media, sports, showbiz and political circles included ABS-CBN chairman Eugenio “EL3” Lopez III, ABS-CBN Publishing chief Ernie Lopez and wife Jeena, Makati Mayor Jejomar Binay, Tessa Prieto-Valdes, Anthony Pangilinan and wife Maricel Laxa, newscasters Karen Davila and TJ Manotoc, Jaime Zobel de Ayala and former Miss Universe Margie Moran-Floirendo. The 2,000-strong contingent from the Lopez Group—in addition to another 1,000 from ABS-CBN and 200 from AFI—was joined by participants from running clubs, private firms, government agencies, multinational companies and residents of communities along the river. The show of support was such that the 5K runners had to start in several batches. Emcee Winnie Cordero joked that next year’s marathon will be held in the North Luzon Expressway (NLEX) to accommodate all the participants. Vincent Chepsiror of Kenya ruled the men’s 42K category with 2:25:43, while Michelle Gilbuena led the women’s division with a 3:18:08 finish.