Kris Aquino, Vice Ganda and other big stars, all praises for the realistic theme of "OTJ"

Vice Ganda and Kris AquinoKris Aquino, Vice Ganda, and other popular Filipino celebrities have nothing but praises to the international appeal and social relevance of Star Cinema and Reality Entertainment's crime-drama movie "OTJ" (On The Job) that stars Piolo Pascual, Gerald Anderson, Joey Marquez and Joel Torre.

According to Kris, she and her best friend Vice are amazed with the newest masterpiece of award-winning director si Erik Matti because its theme is very timely and relevant to what the country is experiencing right now. 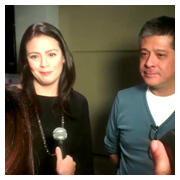 Dawn Zulueta and husband Anton Lagdameo"Sabi nga namin ni Vice: the script was excellent, the camerawork is world-class. It's gritty yet powerful. All the actors are excellent. Gerald and Piolo should be really proud of this movie," further shared by Kris about the film that was graded 'A' by the Cinema Evaluation Board (CEB).

Award-winning actress Dawn Zulueta was hooked with the film’s creative and innovative scenes. “I was focused on how the film was shot. It was so compelling and I love it! It was more focused on the craft. The performance of the actors was superb,” she said

Like Kris, Vice and Dawn, top caliber actresses Dina Bonnevie and Carmina Villarroel salute the realistic theme of "OTJ" that reflects the real happenings in the lives of ordinary Filipinos.

"Watching 'OTJ' is an experience that I cannot forget. It's the first time I've really seen a movie that was filmed so close to reality. It really mirrors what happens in society," said Dina. 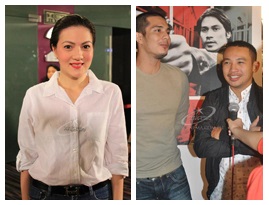 More famous personalities proudly admitted that they were stunned with the great visuals of the film and effective portrayal of its cast.

Like many of those who watched it, the timely narrative of "OTJ" caught the attention of director Onat Diaz, singer Rachel Alejandro and fashion designer Rajo Laurel.

Rajo LaurelRachel shared, "It's different from anything we've ever seen. 'OTJ' is a very exciting movie. Napaka-relevant."

"It's the best film I've ever seen. I think this is gonna be a classic. Magigising ang mga puso at damdamin ng lahat ng mga taong manonood nito," said Rajo.

Don't be left behind in the most talked about action-packed crime-drama in the country today-"OTJ," still showing on cinemas nationwide.