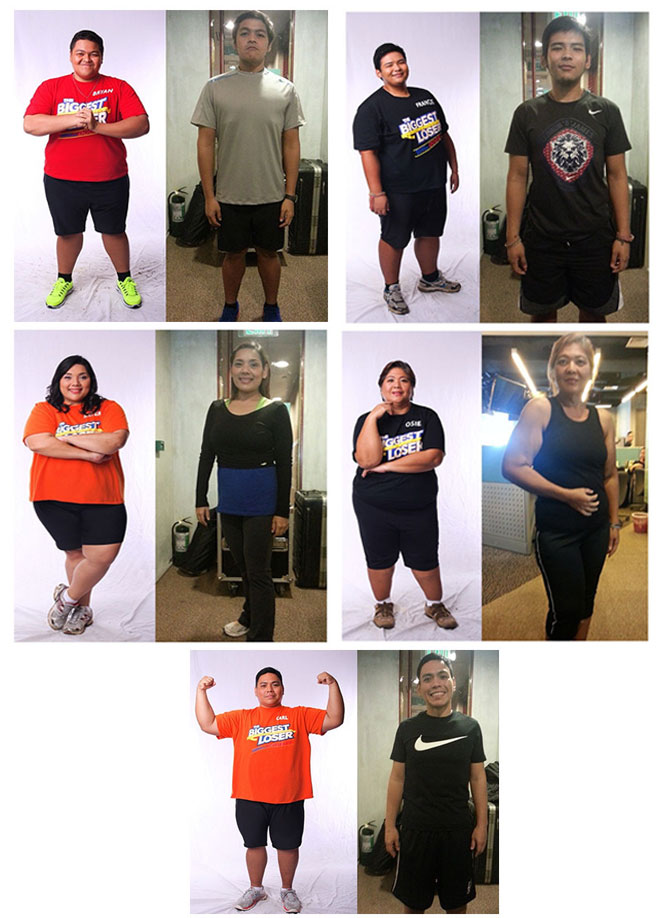 Before and after of Bryan, Francis, Kayen, Osie, and Carl

The five remaining contestants in “The Biggest Loser Pinoy Edition Doubles” are set to come together in another competitive weigh-in this Thursday (April 24) that will determine who among them will clinch the Final Four slots in the reality show’s upcoming finale.

Who among Kayen, Carl, Osie, Francis, and Bryan will face off at the show’s final weigh-in and lose the highest weight percentage to be declared Pinoy Biggest Loser on Saturday (April 26)?

Before the Final Four contestants are revealed, Kayen, Carl, Osie, Francis, and Bryan went through their last major challenge that required them to hike Mt. Pinatubo. On their way to the crater, the final stop of the trail, they brought along with them bags that carried the total weight they lost during their stay in the “Biggest Loser Doubles” camp. Upon reaching each of the 11 stations, they had to drop sandbags that corresponded with the weight they lost during each weigh-in.

“This is a great symbolism. You’re hiking up the mountain, but your weight is dragging you down,” said Carl.

His wife Kayen, meanwhile, quipped, “I’m praying that we join the Final 4 because it will serve as an exclamation point in my journey with Carl.”

During the climb, Francis had to constantly aid Mommy Osie. He remarked, “If you think about it, during our stay in the camp, there were times that we pulled each other up. This time, I helped Mommy Osie so we could advance together.”

“My weight has been a curse, and I will do everything to not gain it back again. I know that when I leave the camp, a new life is waiting for me,” said Mommy Osie after finishing the challenge.

Bryan, who won the challenge by recording the fastest time to get to the crater, hiked alone after his sister Ikya was eliminated from the competition. “I left behind the old Bryan. Even if I don’t join the finale as one of the Final Four, I have already proven myself by finishing the last stretch of this challenge,” he said.

Watch the “The Biggest Loser Pinoy Edition Doubles” this Thursday (April 24) after “Aquino & Abunda Tonight” on ABS-CBN Primetime Bida, and “The Biggest Loser Pinoy Edition Doubles: Ang Bigating Pagtatapos” Saturday night (April 26). For updates on the program, follow @BLPinoyEdition on Twitter and @biggestloserdoubles on Instagram or like www.facebook.com/abscbn.biggestloserpinoyedition. (Story/photos by Kane Choa)