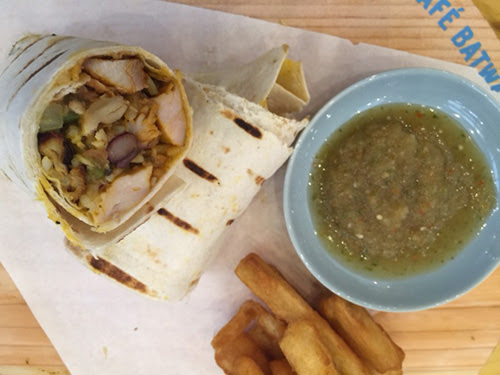 Chef JP Anglo has a new restaurant—and it’s not an- other branch of his fast-grow- ing Sarsa chain.

Taking over the spot of Bistecca at Joya Tower in Rockwell Center, Kafé Batwan is Anglo’s modern Filipino interpretation of the café con- cept, an all-day restaurant that serves breakfast to dinner, with coffee and snacks in between, and even some craft cocktails. But as suggested by its name—batwan is a fruit native to the Visayas and commonly used as a souring ingredient in Negrense dishes like the kansi—there is still a pro- nounced bent towards Anglo’s home province.

Apart from the inclusion of chicken inasal on the menu—a request, he said, from Rock- well’s management—he also repurposed Bacolod classics, like the inasal burrito (served with pumpkin salsa and f resh green chili sauce) and the kansi corned beef, which is listed as breakfast fare and served with scrambled egg and garlic coco- nut rice.

One dish that was made with the café in mind is the Madrid Fusion Super Batchoy, which Anglo first presented during the recent Madrid Fu- sion event in Manila.

Even when he was still at Sarsa, Anglo was quite vocal of his desire to upgrade ba- tchoy into a Filipino version of ramen— and the one at Kafé Batwan is his first attempt at that. The soup stock took 12 hours to flavor and he uses kurobuta pork for the char siu, soft-boiled egg and tuna skin to provide the crunch.

But there is more to Kafé Batwan than upscale Neg- rense food. The range of offer- ings here is a lot wider, from homemade granola from La Union served with muscovado syrup and carabao’s milk and champorado with gourmet tuyo to crispy tawilis and tuna skin chicharon.

Sometimes the playfulness is quite subtle—like the use of garlic co- conut rice instead of the typi- cal sin- angag or replacing pumpkin with ka- labasa to create a bisque, or using San Miguel beer for the batter used in the Pinoy fish and chips.

But Anglo also lets loose, like when he deconstructed the arroz caldo.

The ingredients like the dilis, spring onions, fried garlic and chicken strips are presented separately à la nasi lemak, while the rice is presented wrapped in leaf like the machang and the rice soup is served in a small bowl. Get a little bit of every- thing on your spoon, eat it then follow it up with the soup, and enjoy as all the flavors come to- gether inside your mouth.

There is an obvious South- east Asian touch in many of the dishes at Kafé Batwan, notably the sambal which is used in the grilled kurobuta belly and the batchoy beef ribs, giving these meat dishes a hint of heat. 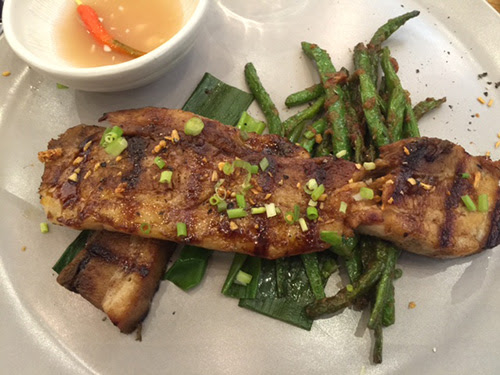 The guinamos curry and sambal beans that accompa- nied the baked lapu-lapu cer- tainly elevated this dish and made it more interesting not just visually but in the symphony of tastes. Even better was the sautéed prawns which come with a mixed bean sauce (mostly the lowly monggo), a hint of chocolate and sambal spices, generally inspired by the chili con carne, that gave the dish a depth of flavor that is both Pinoy and global at the same time.

Unlike Sarsa, Kafé Batwan serves several coffee options although the dessert list, as of the moment, is quite limited. There’s the turon served with a Chocnut sauce; and the bud- bud, a suman-like treat popular in Dumaguete but served in a skillet with some ube butter and pandan coffee cream.