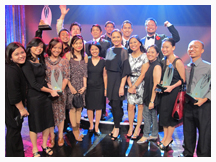 ABS-CBN bagged four awards at the Araw Values Advertising Awards, including the top platinum award for its “Boto Mo, I-Patrol Mo” “Instrumento” advertising campaign. The ad, which was created to encourage Filipinos to get involved in the 2010 presidential elections, featured ordinary citizens monitoring their surroundings and reporting election anomalies. It was recognized for encouraging people to do their share in ensuring a clean and honest election.

ABS-CBN also won three out of the six gold Araw Awards. The 2009 Christmas station ID, “Bro, Ikaw ang Star ng Pasko,” won for instilling the value of love of God and recognizing Him as the true source of blessings. The ad featured Filipinos helping each other recover from the devastation of Ondoy. “Bagong Simula,” which was created for the company’s advocacy campaign BayaniJuan, was recognized for encouraging Filipinos to help each other toward a fresh start for the country. The “Tipid Tubig” radio ad was recognized for promoting the preservation of the environment.

ABS-CBN’s winning entries bested close to a hundred entries in the advocacy communication category. The Araw Awards are the biennial awards program of the Advertising Foundation of the Philippines.