Call for nominations: Gawad Geny Lopez Jr. Bayaning Pilipino Awards“Where there are Filipinos, there are heroes, and it’s time to honor them.”

With this campaign line, firm belief and an international network of regional teams in place to make it happen, the Gawad Geny Lopez Jr. Bayaning Pilipino Awards is going global this year, the first time since its inception in 1994.

“It is a huge and momentous initiative to reach out to Filipinos all over the world and recognize their collective efforts in serving their less fortunate Filipino brothers and sisters wherever they may be. We are truly excited by this development,” said Fr. Nilo Tanalega, SJ who heads Ugnayan at Tulong para sa Maralitang Pamilya (UGAT) Foundation (translated literally as Relations and Assistance for Poor Families). UGAT, a non-profit organization based in the Philippines, oversees the screening of nominations and selection of winners.

“My father would be smiling right now,” said Raffy Lopez, COO of ABS-CBN Global which oversees the promotion and production of the distinguished award ceremonies. “He started Bayaning Pilipino (Filipino Heroes) with Father Nilo. It would warm his heart to know that ABS-CBN in Manila, TFC globally and UGAT, have expanded their long-running partnership to search around the world for ordinary folks doing extraordinary work in the service of the Filipino people. This is true to his vision and mission.” 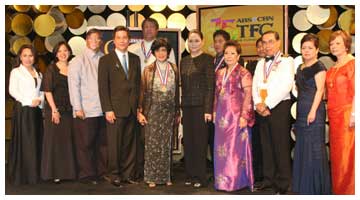 The “father” is Don Eugenio “Geny” Lopez Jr., founder of ABS-CBN Corporation, the largest entertainment and broadcasting company in the Philippines. He is known in the industry as the “Father of Philippine Broadcasting”. The award, which was named after him, began after he learned of a Filipina maid in Hong Kong who got run over by a car in pursuit of saving a child. The award gives recognition to Filipinos (now as organizations) who in the face of challenges and difficulties manage to rise and emerge as role models of service in their communities.

“We have honored so many Filipinos, but taking the search to a worldwide level posed major logistical requirements. We are so enthused by the energy and commitment of TFC teams in all regions in taking part in the project. It shows their involvement and love for the Filipino communities that they serve,” said Chit Guerrero, vice president for ABS-CBN Corporation’s Special Projects which works directly with UGAT in Manila for this project.

Gawad Geny Lopez Jr Global Bayaning Pilipino has kicked off this month. The search is open to all Filipino organizations in the U.S., Canada, Asia-Pacific (covering Singapore and Hong Kong), Europe (covering Italy and U.K.), Middle East, Australia and Japan. The criteria are as follows: (1) Measurable impact: scope and number of beneficiaries with known effective results; (2) Highlight the value of unity/PAGKAKAISA (effective elimination of selosan (jealousy), inggitan (envy), siraan (negative criticism), etc. or has effectively dealt with these either through interventions or through innovative methods); (3) Focused on service and/or an issue (poverty, health, education, etc) as felt either in your respective country or in the Philippines; (4) Transcend regionalism/parochialism; (5) Participatory/people-oriented leadership (as shown in the manner of how they choose their leaders and their acceptance thereof); (6) Promote Filipino values and culture and Filipino heritage.

Deadline of submission of nominations is on March 15, 2012. Regional winners will be announced late May 2012 after a period of tight screenings and validation. The winners will be flown to Manila, Philippines for the national awarding ceremony to be held in June 2012.