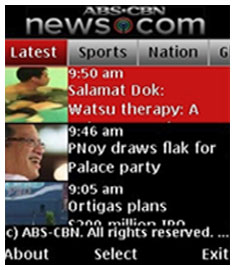 ABS-CBN empowers more Pinoys with availability of news app in more devices ABS-CBN pioneers yet another first in Philippine mobile technology as abs-cbnnews.com becomes the first Philippine TV network to release its mobile application for Windows Phone - including Lumia of Nokia, and phones with Symbian, Java, and Qt Meego operating systems. This app not only gives users instant access to the latest news but also empowers them to become vigilant citizen journalists.

The latest innovation comes after the launch of abs-cbnnews.com's applications for Android phones and tablets, as well as for iOS devices iPhone, iPad and iPod Touch last year that enabled Filipinos on the go a new and faster way of getting news and information from the country’s most trusted news organization.

The free downloadable app is also the first among local news apps to introduce a citizen journalism feature with its “Bayan Mo, iPatrol Mo” (BMPM) ticker. Through this feature - available in Android, iOS and Qt Meego devices - users are able to send reports directly to ABS-CBN News. 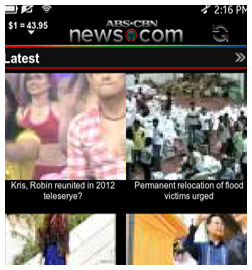 The app also has a customizable feature that lets users choose which particular section — Recommended, Latest, Nation, Metro, Business, Entertainment, Lifestyle, Sports, Global Filipino — they want to subscribe to.  It also has a breaking news ticker and a Philippine Peso-US Dollar exchange rate.

Users can access and download the application directly from the app stores and markets in their mobile devices.

ABS-CBN’s move to expand its mobile news offering to more operating systems is yet part of its continuing effort to be in the service of the Filipino anywhere in the world.  For the latest news and information on the Philippines and across the globe, log on to www.abs-cbnnews.com.