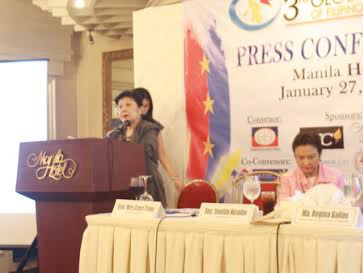 The Commission on Filipinos Overseas (CFO) Executive Director Undersecretary Mary Grace Tirona recognizes the role of media in building solutions for overseas Filipinos (OFs)There are 10.5 million Filipinos all over the world and their collective remittances amounting to $28 billion dollars comprised 10% of the gross domestic product of the Philippines in 2014.  Given these realities and the continued Filipino diaspora’s economic and social contributions, the Commission on Filipinos Overseas (CFO), in partnership with The Filipino Channel (TFC), is set to mount the 3rd Global Summit of Filipinos in the Diaspora from February 25 to 27 at the historic Manila Hotel.

Faced with the reality of Filipinos’ continued diaspora in search for better opportunities, overseas Filipinos’ (OFs) contribution beyond remittance and the shift in Philippine administration in 2016, the CFO will once again provide the platform to highlight the collective achievements of the OFs as represented by the Filipino Diaspora councils, assess government initiatives for the OFs and create a common vision for the Philippine development in 2015 and even in the years to come. 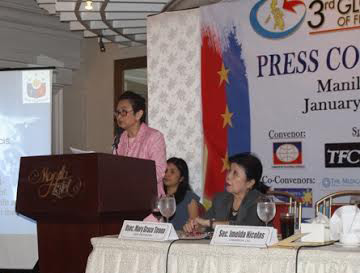 during the recent press conference to launch the 3rd Global Summit for Filipinos in the Diaspora and Chairperson Secretary Imelda Nicolas assures that the summit will not just be a visioning exercise but also a “celebration of the ever renewing Filipino spirit.”Under the umbrella theme “Vision and Action for the Filipino Diaspora 2015 and beyond,” this year’s summit with the help of key partners such as TFC, hopes to gather about 600 Filipinos to provide sustainable solutions by leveraging on OFs’ actual experiences.

Anchored on the migration and development framework under the Diaspora to Development program (D2D) and the success of the 2011 and 2013 Global Summits, this year’s sessions will focus on ten initiatives: Alay Dunong Programs or Brain Gain Program, Arts Culture and Exchange, Balik-Turo (Teach Share) and Educational Exchanges, Medical Mission Coordination, Return and Reintegration, Business Advisory Council, Diaspora Investment, Global Legal Assistance and Advocacy, Tourism Initiatives and Diaspora Philanthropy.  The  continent-based sessions aim to become a ‘visioning exercise’ where participants will be encouraged to set goals, perform appreciative inquiry with a more positive mindset that will hopefully lead into action-planning.

Highlight of the Summit is the sustainability of the Balinkbayan, a one stop online portal for diaspora engagement. 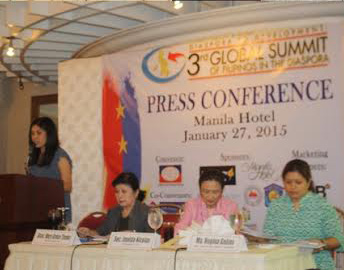 TFC sponsors the Global Summit for Filipinos in the Diaspora for the 3rd time and which now carries the theme “Vison and Action 2015 and beyond” which aims for sustainable programDuring the press conference held recently at the Manila Hotel, CFO Secretary Imelda Nicolas said: “The enduring feature of the Summit has always been the sharing of stories among OFs themselves - about their experiences, their successes and their dreams for the future.  These stories create the bridge for stronger networking and diaspora engagement. This makes the Global Summit not just a mere gathering of overseas Filipinos.  It is a celebration of the ever renewing Filipino spirit.”

Executive Director Mary Grace Ampil Tirona adds, “We are interested in the quantity but also the quality of engagements.  The diaspora, after all, will continue to grow by leaps and bounds.  It’s not so much that we want people to move out but it’s a reality we have to face so we need to create solutions.”

With this, Tirona recognizes the role of media in solution-building.  “It is very important to strengthen our programs (for the OFs),” she said. “Our connectivity is contingent and the role that media, like TFC has to play.  We are not alone in this. We need partners.” 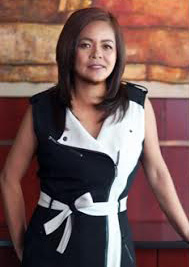 ABS-CBN Integrated News and Current Affairs Head Ging Reyes will speak on how her experience as an OF herself, helped her fulfill the role of TFC as transnationalized media in the lives of OFs (photo courtesy of Metro Society) Ging Reyes, ABS-CBN head for Integrated News and Current Affairs and one of the summit’s plenary speakers, will share how her journey not only as TFC’s former News Bureau Chief but as an OF herself, helped her fulfill this role of transnationalized media and mirror the lives of Filipinos in the diaspora.

Reyes recalls: “Most of TFC’s employees are OFs themselves.  Like me, they had the safety net of ABS-CBN.  But like any OF, we had to face the need to cope with a new environment, work with a different dynamic and adjust to people around us, including other kababayans.  With this she adds, “This made us more effective in sharing the experiences of fellow Filipinos through news programs crafted for distant OFs in key areas in the world.” 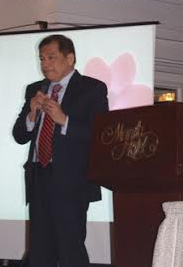 former Senator Joey Lina shares his message on connecting Filipinos around the world, in songThe 3rd Global Summit of Filipinos in the Diaspora presented by CFO and sponsored by TFC for the third time in a row, expects attendees delegates composed of leaders and members of Filipino diaspora councils; past Presidential Awardees from various countries worldwide; leaders and members of various Filipino associations overseas; selected Philippine-based participants, resource persons from the government and migrant-related non-government organizations, multi-lateral agencies, academe and civil society organizations including partners from the recently concluded CFO’s Ugnayan sa Roma, Middle East, and Nordic countries.
Interested parties can visit http://www.3gs.cfo.gov.ph/
Details of the Balinkbayan can be accessed at www.balinkbayan.gov.ph