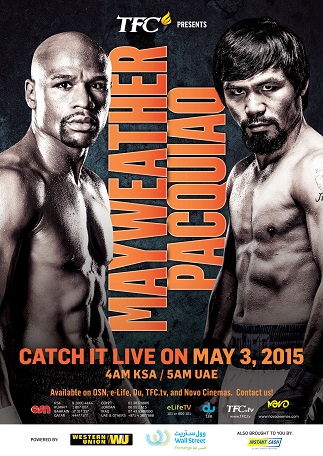 Mayweather-Pacquiao Fight of the CenturyIn a move that reinforces its position as one of the key media players in the pay-per-view landscape, ABS-CBN The Filipino Channel (TFC) signed a deal with Las Vegas boxing bigwigs, Mayweather Promotions LLC and Top Rank, Inc., to be the exclusive distributor of the much-ballyhooed and much awaited welterweight world championship unification bout on May 2 betweenFloyd Mayweather, Jr. and Manny Pacquiao on all media platforms in the Middle East.

“At a time when we are witnessing one of the busiest pay-per-view calendars in boxing in a long time, to be chosen and trusted as the exclusive distributor of not just any marquee PPV boxing event but the ‘Fight of the Century’ is a milestone that we are truly proud of,” said Kai Rodriguez, ABS-CBN managing director for Europe, Middle East and Africa operations. “This solidifies our commitment to strengthen our live sports entertainment offerings, deliver these on our TFC platforms to one of the largest and most engaged audiences in the region, and expand the reach of our content through signed carriage agreements with industry partners.”

ABS-CBN Global COO Raffy Lopez affirms that TFC will always be instrumental in bringing the biggest sporting events to fans around the world. “TFC has always been at the ringside of numerous major sporting events in history,” he said. “Since 2006, starting with the Pacquiao-Morales fight, TFC in the Middle East has been bringing the biggest fights of Pacquiao’s legendary career to the homes of Filipinos in the region. Now, as exclusive distributor in the Middle East and viewing destination platform for the Mayweather-Pacquiao event, all boxing fans there will get better than ringside seats as they watch the fight from the comfort of their homes and enjoy world class sports entertainment.”

Come May 3 at 4am in KSA and 5am in UAE (May 2, 9pm EST/6pm Pacific), boxing aficionados in the Middle East can catch the mega-fight between two of the world’s best pound-for-pound boxers LIVE from the MGM Grand Garden Arena in Las Vegas via PPV on the following cable networks: OSN, eLifeTV and Du. Yet another milestone for TFC in the Middle East is that for the very first time, the network is also making the fight available on the big screen in cinemas across the Gulf in partnership with Novo Cinemas. As the fight falls on a work day in the Middle East, those who cannot stay home or hit the cinemas on this historic date can catch the fight online on TFC.tv.

The most lucrative PPV event in broadcast history is highly expected to be targeted by pirates, so TFC and its anti-piracy team will work closely with law enforcement and partners to ensure that viewers are protected from pirate sites that are rife with malware and scams. According to a report from TorrentFreak.com, a 2014 research carried out by analysts from Intelligent Content Protection concluded that 90 percent of the top pirate sites are linked to malware which means that by clicking on the pirate or "free sites" they are likely to be victim to hackers permanently invading their computers, taking financial and personal data from their emails and hard drives and using their credit cards and bank information to steal funds.

For more information on the Mayweather-Pacquiao Fight of the Century or to order live pay-per-view, please contact the providers above or visit www.tfc.tv. (Story/photo by Nerissa Fernandez)