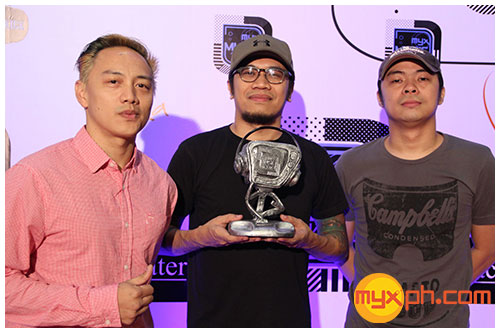 Every time that MYX mounts the Philippines’ biggest awards night in music, they select one mover and shaker of local music scene that they deem historically groundbreaking. This year’s music awards saw the recognition of a group that has brought a whole new, hilarious flavor to Philippine sound.

The award was given to a band that celebrated twenty years of friendship, humor, and good music—Parokya ni Edgar.

Vocalist Chito Miranda found himself humbled by all of this. “Usually people would expect us to say something funny, but for once I’m speechless,” he said when MYX Channel Head Andre Allan Alvarez presented him with the award.

The night of the MYX Music Awards was also one to honor artists, groups, and music video directors who made an impact in the local scene over the past year.

Here is the complete list of winners from the MYX Music Awards night, which was held last Wednesday (March 26, 2014):