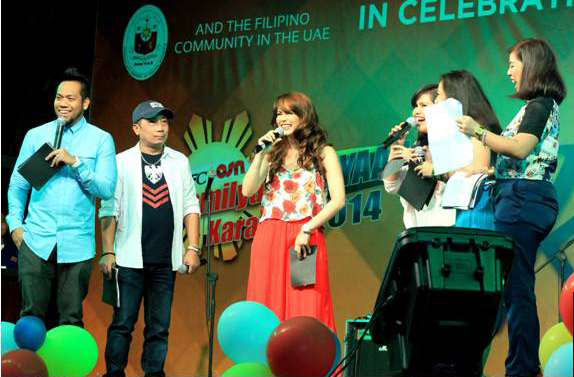 Jessy Mendiola banters with the Tag Radio hosts during the TFC Hour in the Kapamilya Kalayaan Karavan 2014 of TFC - OSN and Filipino Community Volunteers in UAEAfter the successful rounds of the Kapamilya Kalayaan Karavan in the Middle East in 2013, premier Filipino network in the world, The Filipino Channel (TFC), continues to herald the Filipino pride in the region-wide Philippine Independence Day celebrations with the Filipino community, this time in partnership with TFC’s exclusive distributor in the Middle East, OSN. Heading the celebrations this year which also marks TFC’s 20th anniversary were Kapamilya stars Vina Morales, Jed Madella, and Jessy Mendiola who showcased the Filipino skill and talent or ‘Galing ng Filipino’ in Kuwait, Bahrain, UAE, and Oman.

Bannering the month-long festivity was Dynamic Diva Vina Morales who electrified the crowd with her medley of Jennifer Lopez or J-Lo hits and TFC teleserye themes at the Musika at Tawanan 3 in Al Arabi Basketball Stadium, Mansouriya, Kuwait, last June 6. Talented duo Iya and Tekla plus host-columnist Rey Pumaloy injected comedy into the TFC Hour. Over three thousand OFWs longing for homegrown entertainment sang along the artists until the end of the event, staged by TFC – OSN in partnership with the Alliance of Filipino Organizations in Kuwait (ALLFIL-OK). Members of the community also rendered performances showcasing the Filipino talent.

World Championship of the Performing Arts (WCOPA) Hall of Famer Jed Madella showcased his signature, world-class performance with his performance of a medley of Original Pilipino Music (OPM) and the theme song of teleserye “Dyesebel,”"Magakaiba Man Ang Mundo" right smack on June 12 at the Crowne Plaza Bahrain Conference Centre. In partnership with the Filipino Club – Bahrain, the Independence Day celebrations welcomed more than a thousand kababayans.

Joining Madela the next day, June 13 at the Al Nasr, Leisureland, Dubai, UAE was the lead star of the Philippine version of Mexican novela Maria Mercedes which aired on TFC, Jessy Mendiola. The fully packed, whole day celebration, made possible by TFC - OSN’s partnership with the Filipino Community Volunteers in the UAE treated the over 6,000 Filipino crowd to a sundry of activities: a job fair, mini-bazaar, cultural performances, raffle draws, and Pinoy games.

Mendiola then travelled to Oman last June 14 for the Independence Day celebration of the Filipino Community Social Club (FILCOSOC). Held at the Al Falaj Hotel, the venue was filled to the rafters by kabayans of all ages, eager to see their idol, Mendiola. Adding more excitement to the event was a search for a Maria Mercedes ‘Kaloka-like,’ where 11-year-old Angel Murillo emerged winner. Completing the celebrations where a thousand gathered, were cultural performances from the Filipino Community.

Jed Madella belts out a powerful performance for the Philippine Independence Day celebration of TFC - OSN with the Filipino Club Bahrain
From Kuwait to Bahrain and from UAE to Oman, TFC and OSN, in partnership with the Filipino community will continue to banner the Filipino talent in every opportunity. 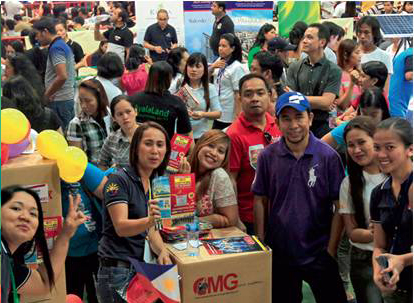 The OFWs marvel at the performance of Jessy Mendiola

The success of this year’s TFC-OSN Kapamilya Kalayaan Karavan 2014 was made possible by TFC and OSN’s partnerships with various Filipino communities in the region: ALLFIL-OK in Kuwait headed by Celerino Umandap; Filipino Community volunteers in the UAE headed by Wendell Castro; FILCOSOC in Oman under the leadership of Rod Desiatco; and the Filipino Club Bahrain under Gregg Esquivel. The events were presented by Moneygram and Cebu Pacific, as well sponsors Microsoft, Ali Café, CMG Cargo, Day To Day, AMAIA, LBC, MSE Magic Star, Mang Tomas, Knorr and Lady’s Choice, and Megaworld. (Story/photos by Marianne de Vera)