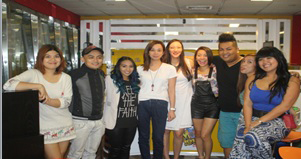 TFCkat winners with MOR DJs Chikki Boom Boom, Pappi Charlz and ToniFor a second time in a row, The Filipino Channel (TFC) provides the stage for overseas Filipinos (OFs) who could be the next generation of stars to shine as it draws the curtain for the 2013 TFCkat winners from around the world as they make their rounds in ABS-CBN and TFC shows. TFCkat, the premier Filipino network in the world’s first global talent search, aims to showcase the Filipino talent and affirm our pride and honor through the performing arts.

According to ABS-CBN North America Managing Director Olivia Finina de Jesus, “TFC as the network that exists for OFs, has always been there to accompany them in their journey overseas, connect them with family or herald their achievements. This year, this mission takes on more meaning as we are celebrating TFC’s 20th anniversary. With the theme ‘Galing ng Filipino (Forge Ahead with the Greatness of the Filipino)’ we hope to bring forth more of these milestones in more avenues. 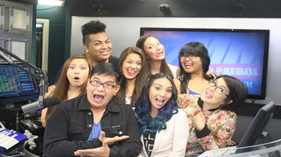 Winners with DZMM's Marc Logan and Amy “Tiyang Amy” PerezAccording to ABS-CBN Europe and Middle East Managing Director Edgardo Garcia, “TFCkat has actually been providing the stage to showcase the Filipino talent since its launch in 2012.” Garcia adds: “This year, the competition runs parallel with our celebration of two decades of TFC and our anniversary theme. ‘Galing ng Filipino’ speaks of the Filipino’s brilliance which we have witnessed so far and how TFC as a network always shares this with the world through our platforms.”

ABS-CBN Asia Pacific Managing Director Ailene Averion adds: “The Philippines abounds with Filipino talents from singers to dancers and TFCkat is the perfect platform that provides the venue to showcase these talents.” She adds,” when we were searching the world for great Filipino talents, we did not only find the best in each region but also a range of voices that are as varied as the cultures of their second homes.” 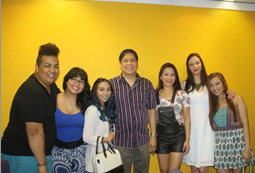 TFCkat winners’ visit to ABS-CBN Integrated News Head of News Gathering Dindo AmparoAcross genres, the TFCkat winners truly shine. North America winner, 22 year-old Katherine dela Cruz can belt out OPM hits as much as she can perform Broadway hits from her favorites such as Lea Salonga. Dela Cruz may be the youngest in the batch but what she lacks in age, she makes up for her vocal prowess. The California resident says she wants to inspire people with her music and TFCkat plays a huge role in her dreams. Another winner from North America is 26 year-old Jenessa Escabarte.

Escabarte started singing since age 10 and her vocal depth proves this. Like dela Cruz, she names Salonga as one of her influences. Half-Filipino, half-French Vanessa Monot can easily catch attention with her towering height and European features. In her finals performance at the momentous “2014 London Barrio Fiesta,” Monot proved she is more than a pretty face as she wowed the judges with her raspy voice reminiscent of female alternative artists. Nearby in the Middle East, 26 year-old Ana Blaza from the United Arab Emirates dabbles in the same type of genre. Blaza may just stand at five feet more or less but this singer has a towering voice that stands out in any crowd, including the “ASAP Live in Dubai” where she earned the champion notch. She calls herself simple but this adjective far describes how she performs on stage. 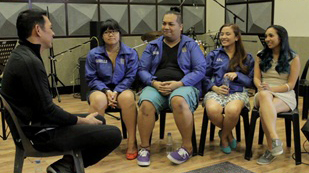 TFC’s 20th anniversary Ambassador Gary Valenciano's session with the winnersFrom the top of the world to the Land Down Under, the Filipino talents abound. Giselle Hernandez, TFCkat winner from Australia has been singing professionally before she entered TFCKat. When this 24 year-old holds the microphone and performs on stage, this musical advantage becomes obvious. On the other hand, Charlie Catbagan, started late in high school and if not for the prodding of a friend. But when this 26 year-old performs covers of his favorite artists like Brian Mc Knight, it seems as if he has been singing all his life.

In their homecoming to the Philippines, the TFCkat winners similarly wowed not just the hosts of widely followed programs in the motherland but also performers themselves, including TFC’s 20th anniversary Ambassador Gary Valenciano. During their first stop at “Ready Get MOR,” the six winners engaged in a gab and song fest with hosts DJs Toni, Chikki Boom Boom and Pappi Charlz. Moving on to DZMM Teleradyo, the winners performed OPM and pop hits at “Sakto” hosted by Marc Logan and Amy “Tiyang Amy” Perez. The group also became part of the celebration of Tiyang Amy birthday as they were asked to perform a birthday song for the celebrator. Later in the visit, some of the TFCkat winners performed on TFC’s first online chat program “Kapamilya Love Chat” hosted by DJ Cha Cha. 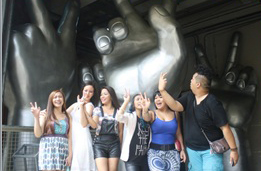 The TFCkat winners at The Voice studio As a highlight of their tour of the ABS-CBN studios, the TFCkat winners performed ‘samples’ or a showcase of their talent, a term made popular by the variety hit “It’s Showtime.” In one of the segments of the show hosted by Anne Curtis, Vhong Navarro, and Billy Crawford, the winners were challenged to copy the performance of one of the group contestants who performed the song “Somewhere,” revived by Angeline Quinto for “Ikaw Lamang.”

As the highlight of the tour, Gary V visited the TFCkat winners during their recording of the anniversary theme “Galing ng Filipino.” During the visit, the Total Performer shared his precious time, mentoring the winners to increase their chances of making it big in the industry. To complete their experience, the TFCkat winners were also given the chance to give back when they recently visited the Children’s Village in Calamba, Laguna (Luzon Island). 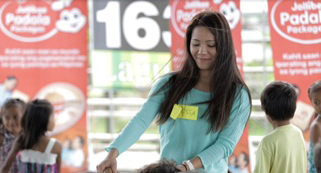 Jenessa Escabarte with the kids of Bantay Bata Children’s VillageAcross regions and across avenues, TFC continues to put the spotlight on great Filipino talents through platforms such as TFCkat. Get to know more of the TFCkat winners. Watch them on “TFCKat: The Journey to the Philippines” this November on TFC worldwide. Watch more of their worldwide appearances on TFC’s official online service TFC.tv and via TFC’s video-on-demand service in North America, Europe, Australia, New Zealand and Japan. Connect with fellow global Filipinos, visit www.facebook.com/KapamilyaTFC or follow @KapamilyaTFC on twitter and instagram.