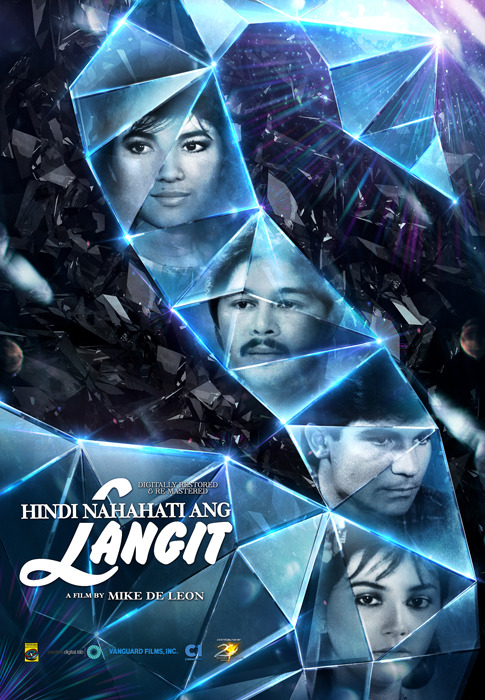 NEW HINDI NAHAHATI ANG LANGIT POSTERWhen film restoration in the country is being talked about, the first thing that will come into mind is the restoration of classic Filipino films the likes of “Himala” and “Oro Plata Mata.” But for ABS-CBN Film Archives, the country’s pioneer in locally restoring and remastering films, the preservation of Filipino films is not limited to old titles but also covers recent ones.

“Even more recent films have some defects that were not important enough to fix during its initial commercial run in theaters or were unnoticeable in a standard definition television broadcast. However, today's more sophisticated technologies require crisper images and more picture clarity so we need to address these defects as we convert the old SD films in to High-Definition,” said ABS-CBN head of Film Archives Leo Katigbak.

Since ABS-CBN Film Archives started restoring films in late 2011 in partnership with Central Digital Lab, it has already restored a total of 63 films that were produced from 1976 to 2011.

Some of these restored films are available to the public via theatrical releases, DVDs, free-to-air television via ABS-CBN, cable television via Cinema One, and global television via TFC. Some are also available on iTunes, which is another first made possible by ABS-CBN Film Archives.

ABS-CBN is the first Philippine-based Content Company that has regularly and consistently made Filipino films available on iTunes locally and internationally.

"Our performance in iTunes isn't big business yet but its better than we thought. And it's also filled with surprises. Who could imagine that a movie like Cinema One's ‘Mater Dolorosa’ would be performing as well as Star Cinema's ‘The Mistress.’ There are certainly new opportunities at play now and on a global field."

HD TO HD MOLDS“Hindi Nahahati ang Langit” tells the story of Noel Delgado (De Leon) and Melody (Tolentino), step-siblings who grew up belligerent to each other. Melody appears to be trying hard to get attention while Noel remains indifferent. When their parents died, Noel becomes the legal guardian of Melody who is annoyed with Noel’s strict and old fashioned ways. The two should have parted ways when each got married but still their lives intertwine when Melody gets into the construction business as Noel’s business partner, stirring jealousy and suspicion in their respective spouses.

The digitally restored and remastered version of “Hindi Nahahati ang Langit” will be screened in select cinemas later this month.