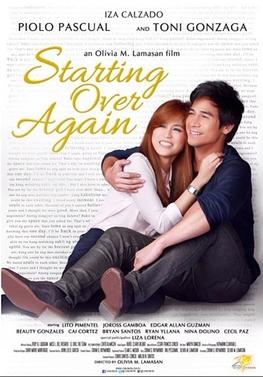 Piolo Pascual and Toni Gonzaga set to make hearts melt this christmasDo you want to travel down feelings lane this Christmas season? Get your tissues ready because Cinema One is showing the much-loved tear jerker movie of the year, ‘Starting Over Again’ in its Blockbuster Sundays timeslot.

‘Starting over Again’ is set to premiere in Cinema One’s Blockbuster Sundays on December 14 (Sunday), 8PM. The movie is headlined by Piolo Pascual and Toni Gonzaga who play exes that run into each other again years after they go separate ways. It also stars Iza Calzado, Joross Gamboa, Beauty Gonzalez, and Yayo Aguila.

The 20th year anniversary offering movie of Star Cinema was an instant box-office hit. ‘Starting Over Again’ earned a staggering 25 million pesos on its opening day alone. The film earned a total domestic gross of 400 million pesos which made it as the first non-Metro Manila Film Festival film entry to reach said amount. On April 1, 2014, the movie gained 491.67 million in both domestic and international screenings.

As Star Cinema’s biggest movie of the year, ‘Starting Over Again’  was the perfect Valentine’s day offering this year as it featured lines and scenes that are heart piercing and relatable to a wide audience. Moviegoers also left the cinema saying the movie was realistic, capturing issues that commonly occur in relationships that were portrayed and told well. The Piolo-Toni tandem coupled with a spot on well-written script is the secret formula as to why the movie became a huge hit.

The Piolo-Toni tandem started off with the classic, “I Love You, Piolo” soda commercial. Today, their love team has spawned successful projects with ‘Starting Over Again’ as the most memorable.

Director Olivia M. Lamasan has strayed away from the mainstream happy ending expected from romantic films. Lamasan instead gives the audience a different version of a happy ending for ‘Starting Over Again.’ Just like her previous box office hits ‘Milan’ and ‘In The Name of Love,’ Lamasan’s work for ‘Starting Over Again’ is a boy-meets-girl love story exploring the concepts of missed connections and lost love.

Catch ‘Starting Over Again’ and other great movies this December only on the number one Cable Channel celebrating its 20th year, Cinema One!